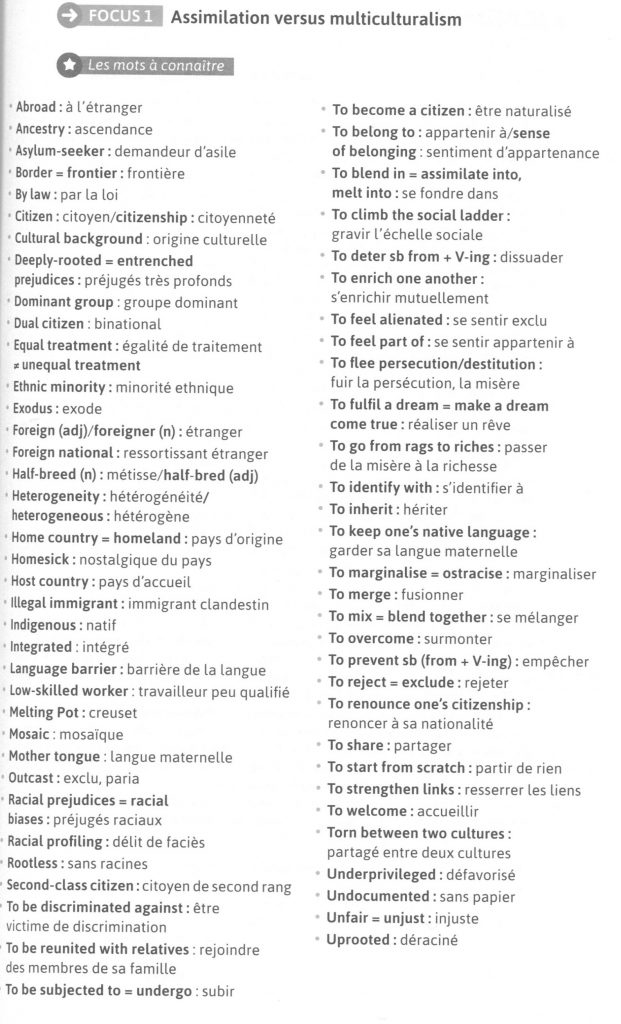 Differences between the USA and Great Britain

dating : In the UK, exclusivity is assumed and people don’t tend to approach strangers in public for dates. In the US however, exclusivity has to be confirmed, and approaching someone you find attractive in the US is more normal. Also, British people are more likely to ‘go Dutch’ – pay equal on a date – than Americans.

guns : In the US, it is legal (and in parts normal) to carry a gun and it’s even written into the constitution of the country. In the UK on the other hand, citizens can’t carry a gun in public, and neither can regular police officers.

drinking alcohol : The UK drinking age is 18, whereas the US drinking age is 21. In practice what that means is a lot of illegal drinking goes on in America. Still, the UK’s ‘standard drink’ is just 8g of alcohol, compared to the US, which is 14g.

Healthcare : Th UK has universal standardised healthcare in the form of the NHS (National Health Service). Although Barack Obama attempted to crate a health model similar to this, there is almost always a cost for using the health system in the US.

Similar language between both countries but quite a few differences.

For more than 70 years, the term « special relationship » which characterizes the bond (= tie = liens) between both countries has been used by statesmen (= hommes d’Etat).

The US and British strong cultural, political and economic ties helped them face the rise (= montée) of communism as (= en tant que) allies (/ˈælaɪz/) with the creation of NATO.

– Both countries invest more money in each other’s economy than any other country.

– They share their workforce (= main d’oeuvre) with numerous (= de nombreux) American people working for British affiliates (= filiales) in the USA and vice versa.

The UK, a melting pot 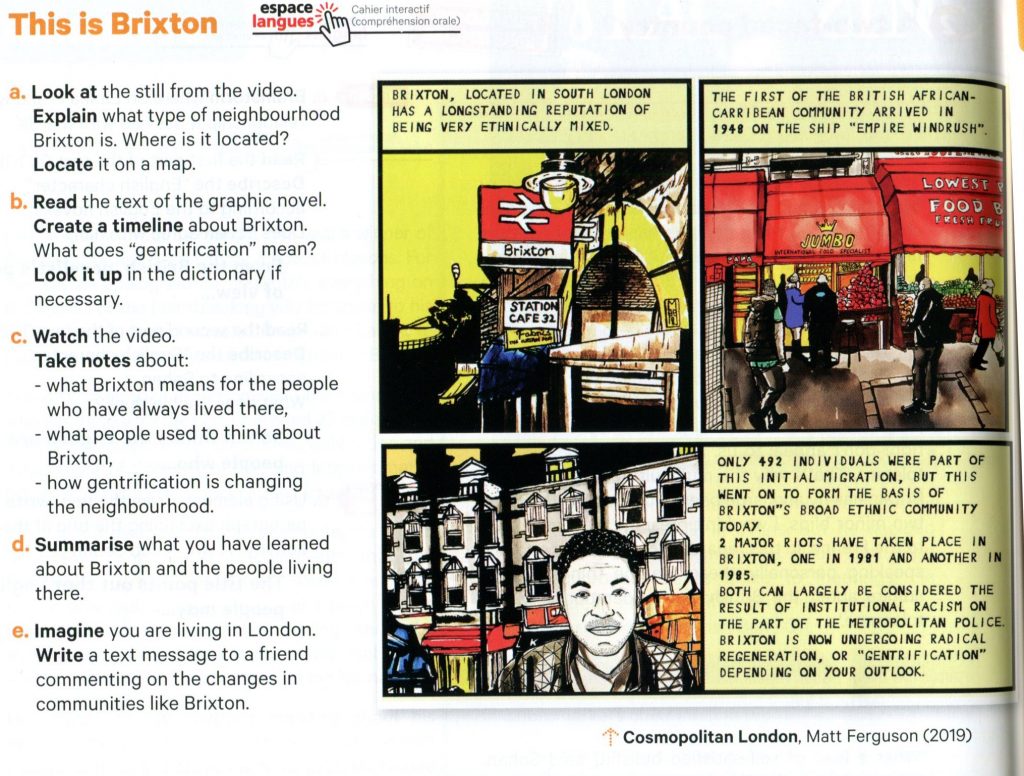 Urban area, located in the south of London.

– From 1948 : immigrants from all over the world keep coming

– 1981 : protests against police violence end up in riots

* /ˌdʒɛntrɪfɪˈkeɪʃ(ə)n / = the process of renovating and improving a house or district so that it conforms to middle-class taste.

What Brixton means for the people who have always lived there :

It means « family, culture and colour », « home », the place where their parents met, where they have lived all their lives, a place of political awakening (= éveil)

What people used to think about Brixton

They used to think that it was a rough (= dangerous) area so most people didn’t want to interact with it. Yet others thought it was worth it living there to get a bigger place to live in. The district was stigmatized (= discredited) because of drug trafficking and its violence and criminality rate.

How gentrification is changing the area

It has made it a more welcoming place to the point that now, it has become an exciting, lively and trendy place. People are encouraged to go there and some have started a « love affair » with the neighbourhood. Yet, some fera that Brixton might lose its multicultural appeal. Soon they might not recognize the Brixton they grew up in.

The impacts of language, immigration and globalisation on cultural identity and integration 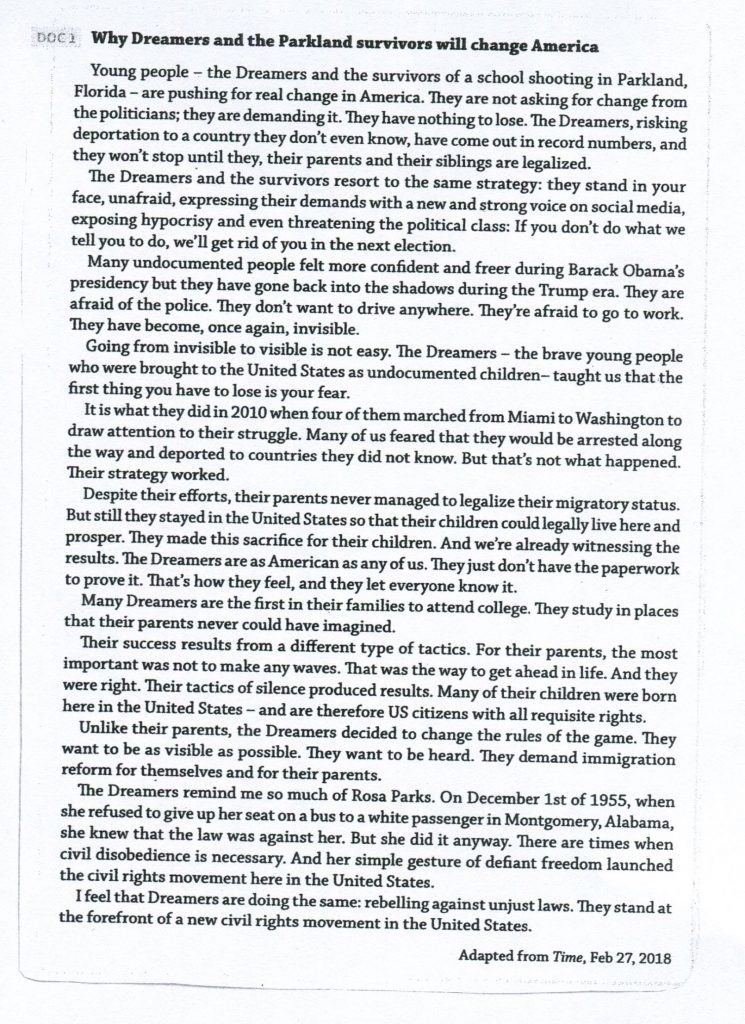 The Dreamers are the children of illegal immigrants and undocumented immigrants in the USA.

The Parland survivors are students who survived a school shooting in Parland, Florida, in 2018 that killed 17 people.

The Dreamers and their parents have opposite attitudes regarding their integration into the American society.

Although both are undocumented immigrants, the Dreamers are much more self-confident, self-assertive (= sûr de soi) and visible than their parents who did everything not to be noticed for fear of being sent back home. On the contrary, their children dare (= oser) ask for rights forcefully and weigh more heavily in the country’s policies thanks to social media. They are not as afraid as their voiceless parents and they have been educated in the USA.

« Changing America « : Through their determined attitude and collective rebellion, the Dreamers as well as the Parkland survivors are managing to get heard and visible. Their movements are gaining momentum (= gagner en puissance) and politicians have no choice but to listen to them. These youth have a voice that matters and are initiating a new civil rights movement.

Deportations of illegal immigrants increased during his first presidential term but dropped during the second one. In 2012, a temporary reprieve (= sursis) from deportation was granted to the the people who had been brought to the USA as children. More than 600,000 young people took advantage of this offer which also granted them work permits. In 2014, Obama unsuccessfully tried to expand reprieve to millions of the Dreamers’ parents. 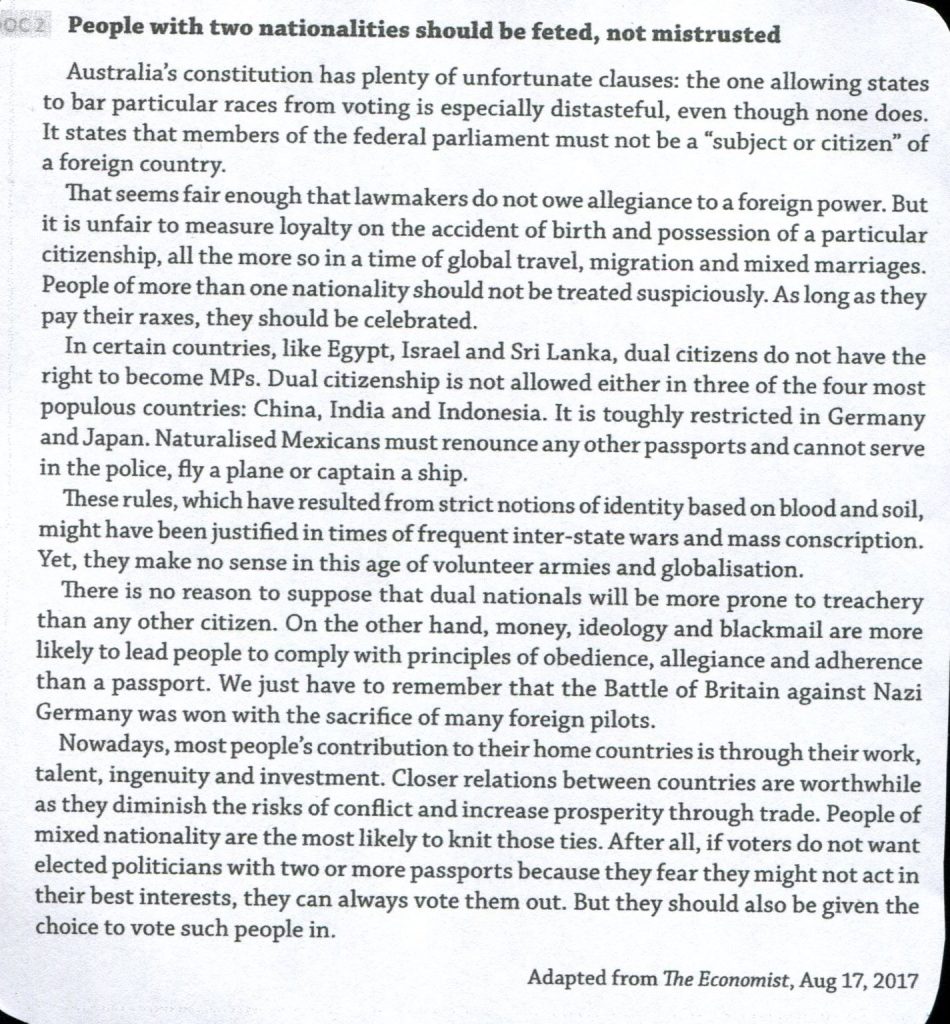 The text deals with the problem of Australian citizens who have a dual citizenship. The law forbids them to become members of parliament. They are considered suspiciously. This situation can also be found in other countries such as Egypt, Israel and Sri Lanka. In India, China and Indonesia, the situation is worse : dual citizenship is forbidden.

When these laws were adopted , they were consistent with (= correspondre à) strict notions of identity based on blood and soil ; at that time, inner-states conflicts were frequent and dual citizens used be considered as traitors.

According to the journalist who uses strong terms like « distasteful », « unfair » and « make no sense »‘, this discriminating system is obsolete (/ˈɒbsəliːt/) (= out-of-date). For him, loyalty should be measured by people’s involvement and countribution to their country and not by a passport. He also regards (= consider) sacrifice and respect for law as a proof of loyalty to one’s new country.

Examples of forced assimilation include the indigenous populations of the USA, Canada, Australia and New Zealand. In all theses cases, the children were taken from their families and placed in boarding schools or in non-native families in order to separate them from their cultures and native languages 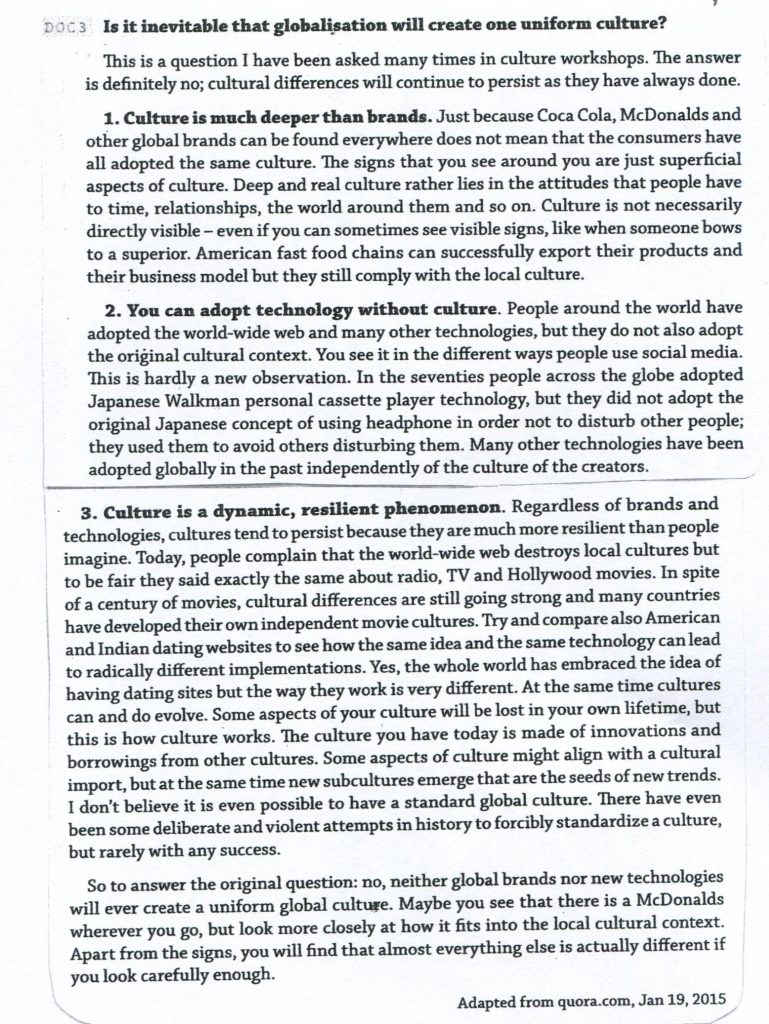 1) What do people often fear regarding globalisation ?

2) Why are these fears not grounded or rational?

3) Quote the positive sides of globalisation.

4) Can globalisation be considered as a form of imperialism ? 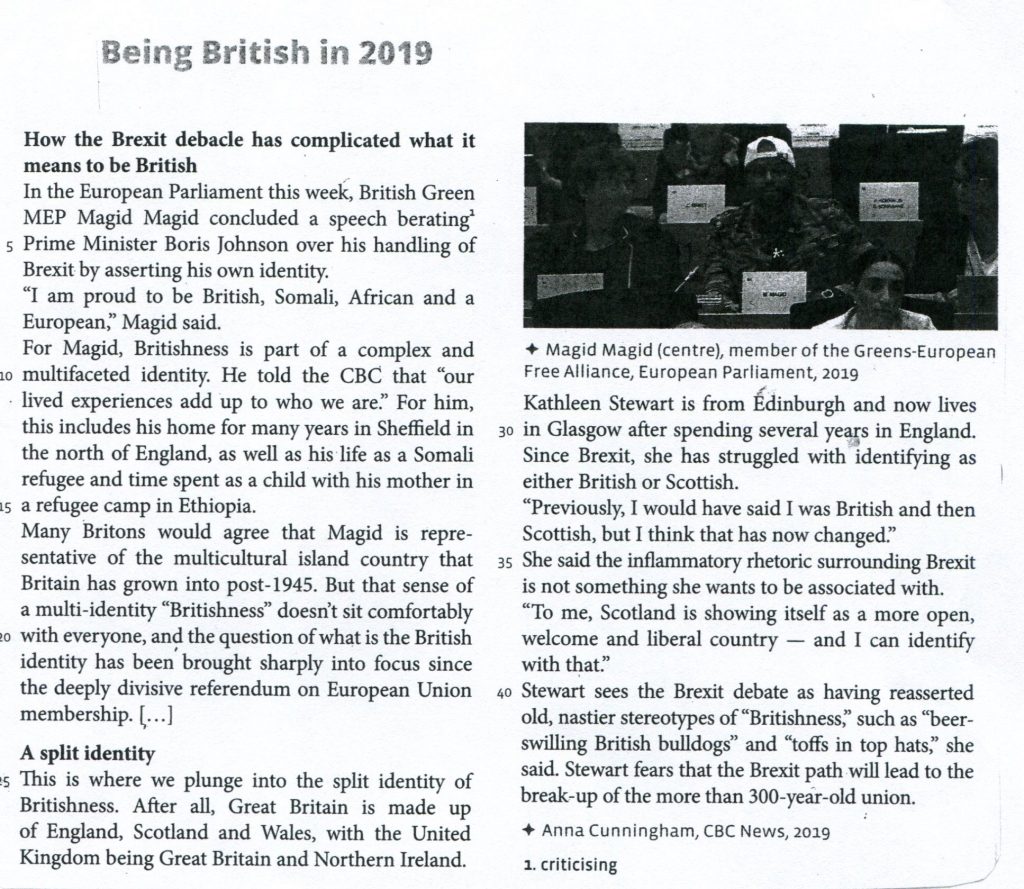 « Britishness »: it is the fact of being British or of having qualities that are considered as typical of British people. It forms the basis of their unity and identity and the expression of British culture.

The post-1945 era was a time of multiculturalism for the United Kingdom since people from the former British Empire, from Ireland and from other European countries migrated and settled there, contributing to the creation of a common identity. So Britishness became “Multi-identity Britishness” which means that Britishness is now a multifaceted identity ; It is in fact the sum of various identities, origins, backgrounds or cultures that merge into a unique, complex and rich identity.

The effects of Brexit on the nations that form the UK.

Brexit has led to a more fragmented identity among the Scots, the Irish and the Welsh, who find it harder now to define themselves as British. Many people dread that populist parties and xenophobic movements might seize (= saisir) the opportunity and thrive (= propérer) in the UK. 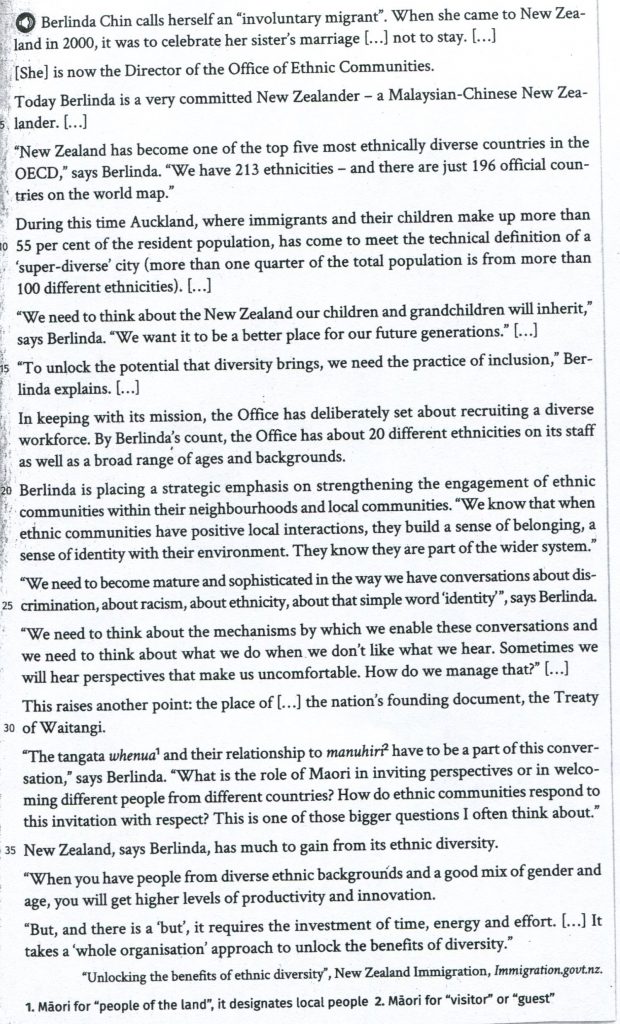 N.Z. can be qualified as “super diverse” because more than one quarter of the total population is made up of than 100 different ethnicities. In fact, 55 percent of the population are first or second generation immigrants, and there are 213 ethnicities represented in the country.

Actions taken in favour of inclusion and diversity

In order to be more inclusive, some companies hire people from diverse ethnic and social backgrounds, as well as different age ranges. In some organizations, more than 20 ethnicities are represented. This is an example for other companies which are shown the benefits of diversity.This way, everybody feels represented at work.

What issue should be tackled (= aborder) in order to make New Zealand a more inclusive place ?

To make N.Z. a more inclusive place, communication should become the number one priority. People should not be afraid to have uncomfortable conversations and speak their minds.

Benefits of being a diverse nation

Diversity improves creativity and innovation as you benefit from different perspectives and interactions. Consequently, a wider range of possibilities can be explored..