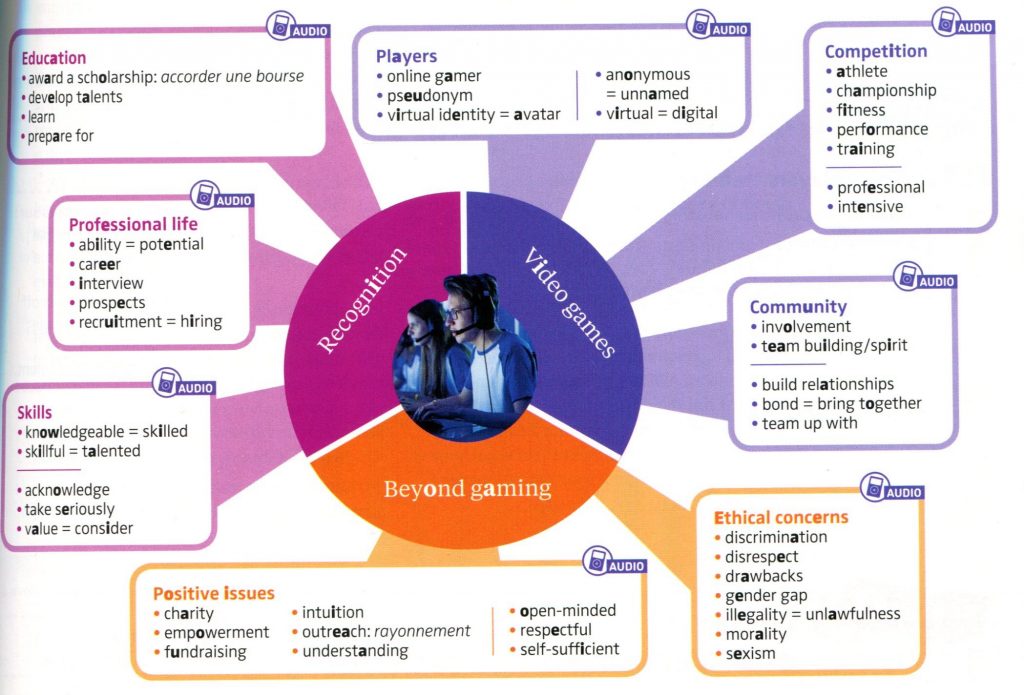 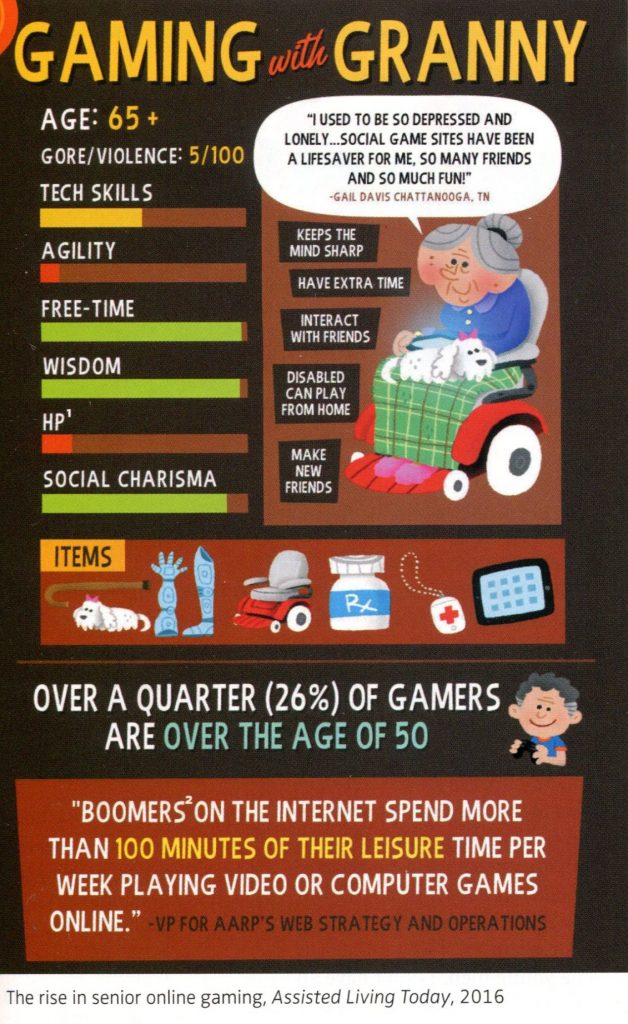 The positive sides of video games or gaming for older adults:

With video games, the notion of physical appearance with all its complexes is erased (= effacer). People are stimulated, motivated  (= empowered) by what they can bring to the community.

Markstrom is a Twitch TV Broadcaster (= animateur) who set up 2 years ago a partnership with Gamers Outreach, a charity (= organisation caritative) which collects money (= to raise funds) in order to (= afin de) assemble portable consoles on carts (= charriot). These video games consoles are offered to children’s hospitals  and help sick children forget about their pain and their medical treatments for a time. For a moment, they feel normal again doing something normal.

This NGO (= non governmental organization) was founded by Zach Weichel 10 years ago.

Text 1: The example of e-Sports 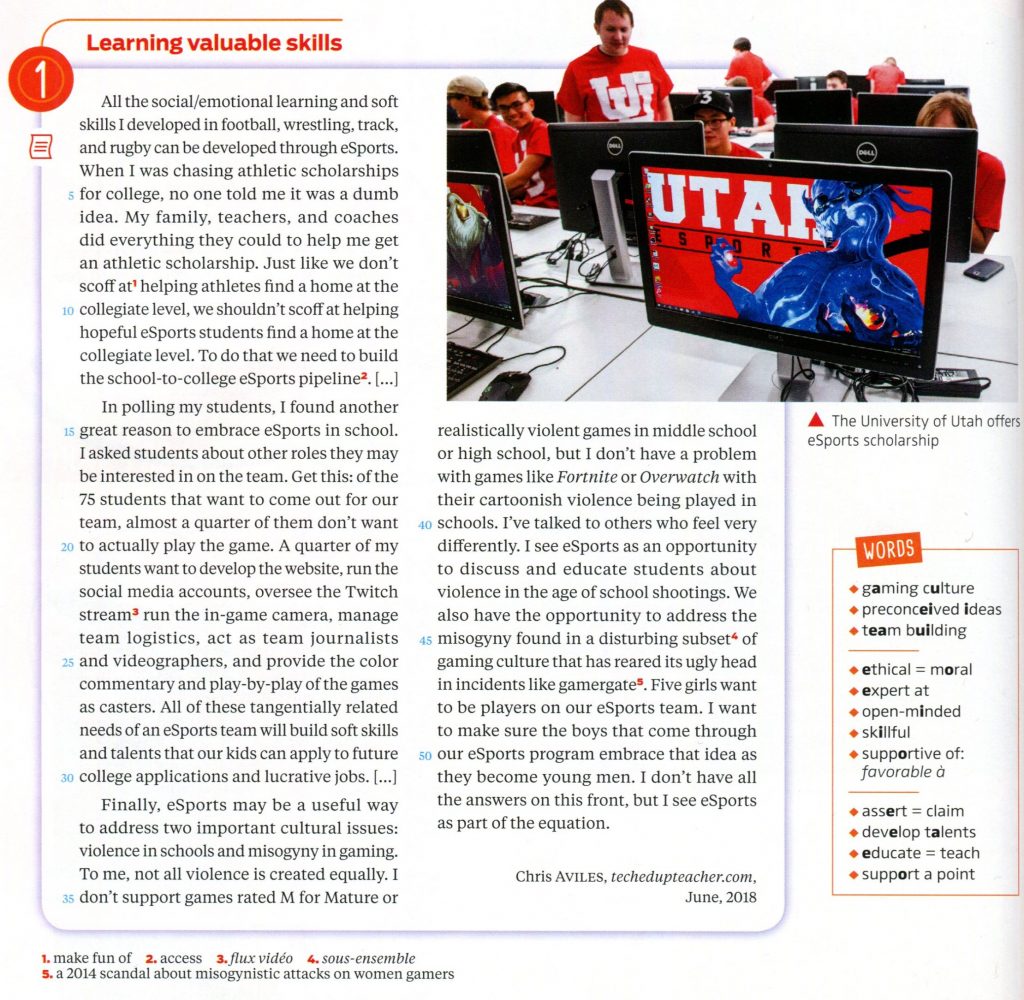 Chris Aviles who is a teacher promotes (= promouvoir) the use of videogames at school. According to him, they allow students to develop valuable (= précieux / utile) skills (= competences) which may be useful for their future jobs.

He compares eSports to traditional sports such as football, wrestling and rugby thus implying that eSports is just like any (= n’importe quel) other sports.

Indeed eSports allows students to build skills and talents for their professional career but it may also be useful to educate students about violence at school regarding mass shootings. To finish with, it may be a means (= moyen) to address (= s’attaquer à) the problem of sexism related to gaming culture. 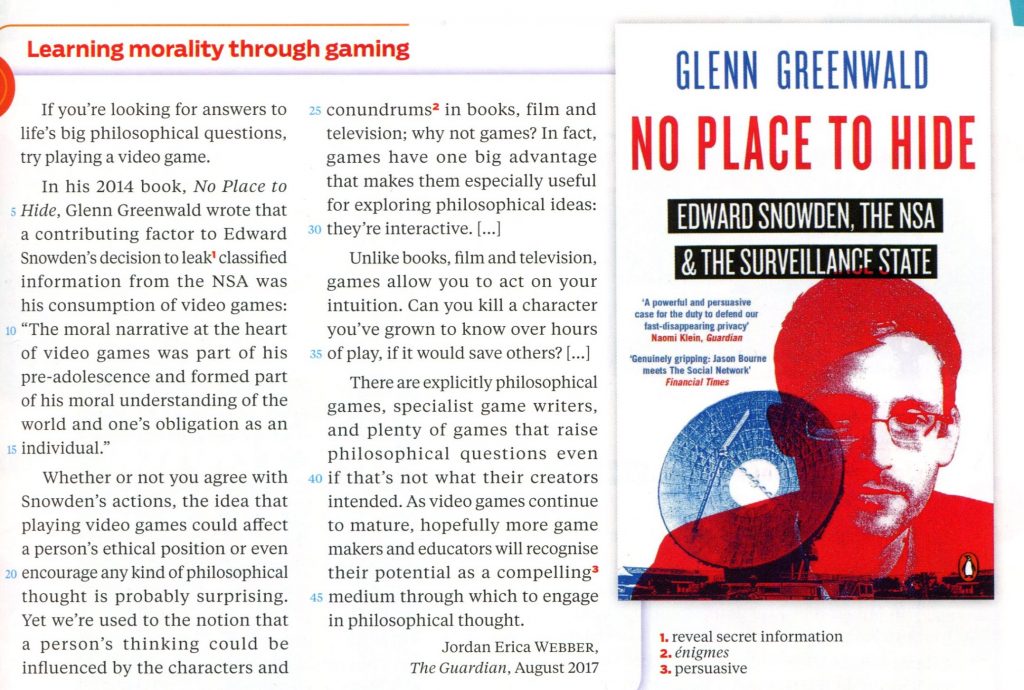 The positive sides of playing video games is that they are interactive and they can be seen as a medium to learn morality.

The common point of games and books / films is that people can be influenced by the characters and th plots but only video games allow (= permettre) you to follow your intuition. As a matter of fact (= en fait), they encourage free will since (= puisque) they allow gamers to act on their intuition; they need to make decisions and choices.

Last but not least (dernier (argument) mais pas des moindres), they may be used to deal with (= focus on) moral questions as they place gamers as being totally responsible for their choices and the consequences they may have. 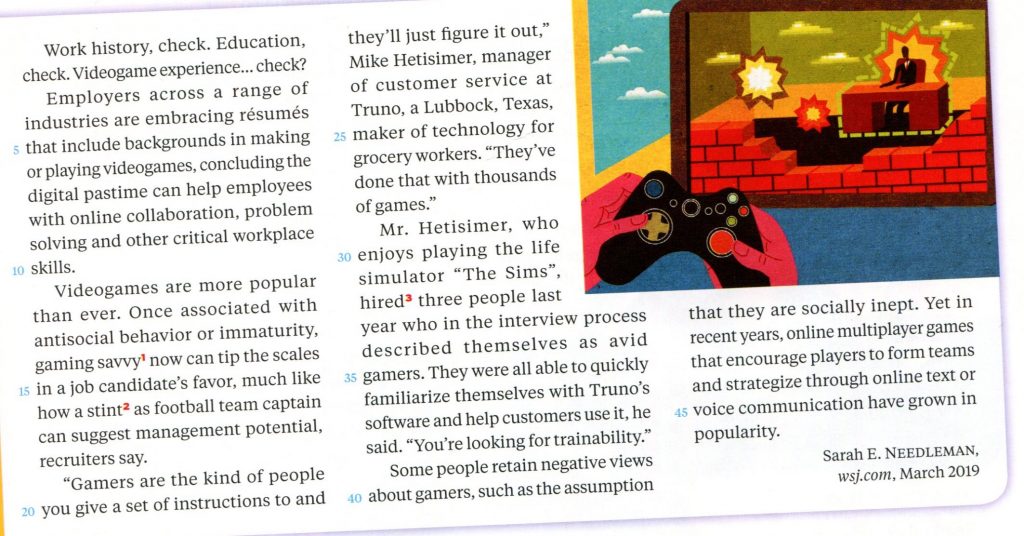 The new trend among recruiters at the moment is to favour candidates who make or play video games because video game players are said to :

Gamers are no longer considered as people living in a virtual world, they are connected to reality.

Topic of the film.

Present the society depicted in the film. Through which eyes do we discover it ?

Why do they get involved with eachother ?

What is the main message of the film ?

Main themes dealt with in the film.

Valid : In the context of the film, a ‘valid’ is a genetically engineered individual

Invalid : An ‘invalid’ is an individual conceived naturally; not genetically engineered

Genoism : Discriminating against an individual based on their genes

Myopia : A condition of the eye, commonly called short-sightedness

Borrowed ladder : An invalid who adopts the identity of a valid, impersonating them through posession of their genetic material

De-gene-erate : A derogatory term for a borrowed ladder. It is also a play on the word ‘degenerate’, meaning an individual of exceedingly low status

Flat foot : A colloquial, derogatory term for a police officer.

Geneticist : A scientist who studies the inheritance of traits

Vial : A container, usually made of glass and characteristically used for holding liquid medicines or human samples such as blood.

Superioriy : the quality of being better than someone or something (cf: inferiority)

Genetic engineering : the technology of preparing recombinant DNA in vitro by cutting up DNA molecules and splicing together fragments from more than one organism

in-vitro : in an artificial environment outside the living organism

surveillance : close observation of a person or group

bioethics : the branch of ethics that studies moral values in the biomedical sciences

morality : the quality of being in accord with right or good conduct

dysfunction : any disturbance in the working of an organ or body part

enhancement : an improvement that makes something more agreeable

perfection : the state of being without a flaw or defect

heriditary : occurring among people descended from a common ancestor

genome : the full DNA sequence of an organism

determinist : anyone who submits to the belief that they are powerless to change their destiny

fate : the ultimate agency predetermining the course of events

defect : a failing or deficiency — defective : markedly subnormal in structure or function or behavior

free will : power of making choices unconstrained by external agencies

totalitarism : a form of government in which the ruler is unconstrained

totalitarian : of a government with an authority exerting absolute control

authoritative : of recognized power or excellence

rejection : the act of turning something down