With the help of the chart (= tableau) below, imagine 6 questions focusing on your school mates’ reading habits. Ex: What type of books do you read?

Question words are also called wh questions because they include the letters ‘W’ and ‘H’.

How do they help us understand reality?

Definitions of the terms Fiction, Young Adult Literature and Dystopia. 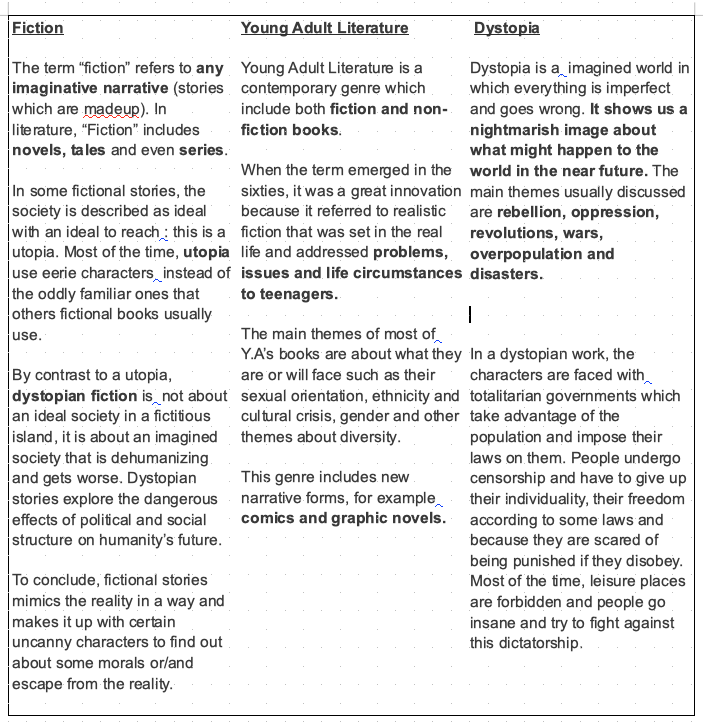 – A few examples of dystopian literature : The Hunger Games, Delirium, I Robot

– Key elements of the genre : an imaginary futurisitic world / oppression and control of government – society – firm.

– It starts with a perfect society

– A dystopian story shows what would happen if….and aims at criticising our present society.

– This genre was born at the end of the 19th C with The Time Machine by H.G. Wells.

– Most novels were targeted at adults.

– The first young adults dystopia was The Giver by Lois Lowry in 1993.

– Since then , this genre has been very successful with young adults (Among the Hidden / The House of the Scorpion / Uglies / The Maze Runner / Feed / The City of Ember / Bar Code Tattoo / The Forest of Hands and Teeth / Divergent / Matched / Delirium

a society controlled by its government or technology or its religion or ideas.

a society based on lies.

a disaster is often at the origin of this dystopian society.

individuality is banned and conformity is imposed.

Under a perfect image, citizens are kept under control thanks to propaganda.

– Its themes and messages :

the danger of government’s control and particular policies which reduce individual liberties.

the importance of knowledge and truth

yielding (fournir) one’s personnal data to someone else.

The danger of technology.

The danger of desensitisation

Watch the trailer, answer the questions and then sum it up.

a) Pick up key words, audio elements, informations about the atmosphere.

b) In your opinion, what sort of document is it ? What do you expect to see ?

c) Focus on the elements of story. (setting, characters, society)

e) What is the purpose of this document ?