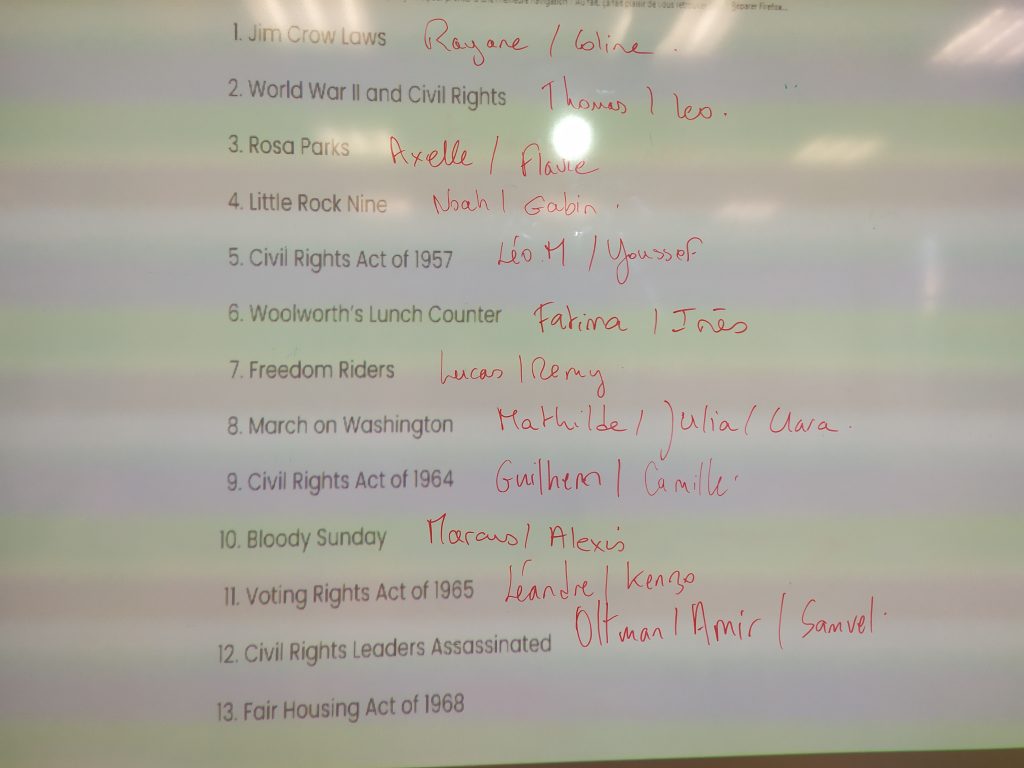 Most of these laws are known as « Jim Crow Laws » in reference to a fictional character created at the beginning of the 19th C : Jim Crow. It quickly became a generic term to refer to AfricanAmericans in a pejorative way. 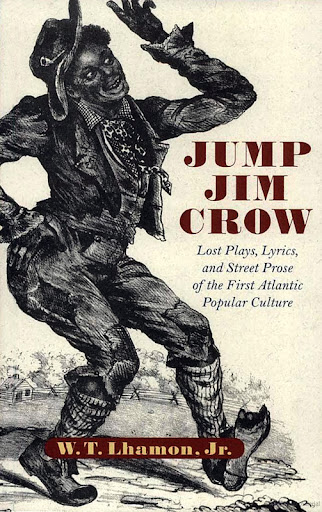 These laws were created after the Civil War (1860-65) so after slavery was abolished to make racial segregation legal and normalized.

Segregation is the process by which social distancing is imposed on a group, here African-Americans.

So these laws introduced segregation in :

This segregation restricted social interactions between whites and people of colours to the strict minimum. In this context, the life of black Americans was a life of threat (= menace), violence and terror : getting to the wrong place, taking the wrong bus could lead to death.

The group which embodied in its most extreme way the violence of the system was the Ku Klux Klan, a secret supremacist society created in Tennessee : fires, rapes (= viol), lynchings (murders by hanging), all means were good to control the black community.

After a long fight, the end of segregation was signed on July 2nd 1964. 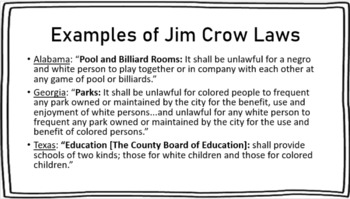 – The first federal civil rights legislation passed since the abolition of slavery in 1865.

– it was signed by President Eisenhower.

– Its aim : to increase protection of POCs’ voting rights.

– Its impact was limited on black people’s participation in elections.

– February, 1 1960 : 4 African-American students sat at a lunch counter at Woolworth store in Greensboro, North Carolina and politely asked for being served, which was denied because this counter was a « white-only » counter. When asked to leave, they stayed where they were until closing time and came back the day after with more students. Within a few days, more than 300 people took part in the sit-in.

– These sit-ins led Wolworth stores to cancel their segregation policy.

– Their passive resistance and peaceful demand, inspired by Martin Luther King’s principles of non-violence, helped spark a youth-led movement to challenge racial inequalities in the south. 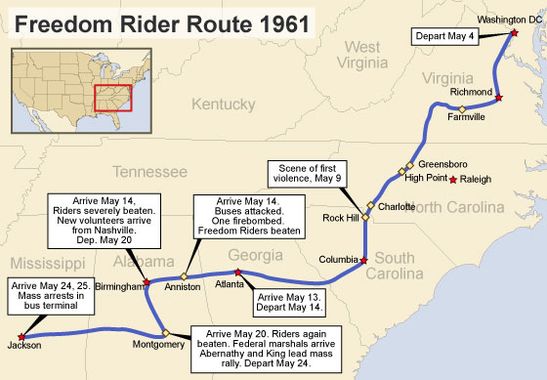 – A civil rights activists group originally composed of 13 people (7 POCs and 6 whites) but which grew to 450 people.

– Their goal : a bus trip from Washington D.C. to Jackson, Mississipi to force the desegregation of public buses which had become legal but not enforced in southern states. This trip was not the only one in that period.

– What happened : in southern states, these activists were arrested on the pretext of breaking laws. In Alabama, one bus was firebombed. The police failed to protect them and even beat them up helped by the white population and local Ku Klux Klan’s men.

– One of the most important laws enacted by Congress and the most far reaching piece of civil rights legislation in the USA.

– Goal : to enforce the voting rights guaranted by the 14th and 15th Amendments and thus increase the right to vote for racial minorities.

– This act banned the use of literacy tests.

– Yet, the enforcement of the law was weak (= faible) in the southern states where the proportion of black people was high and their vote threatened the political power of the whites. 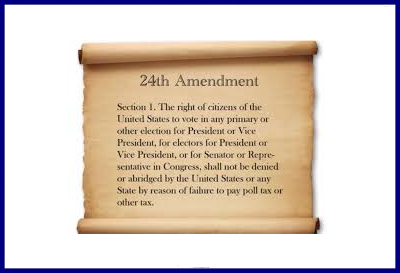 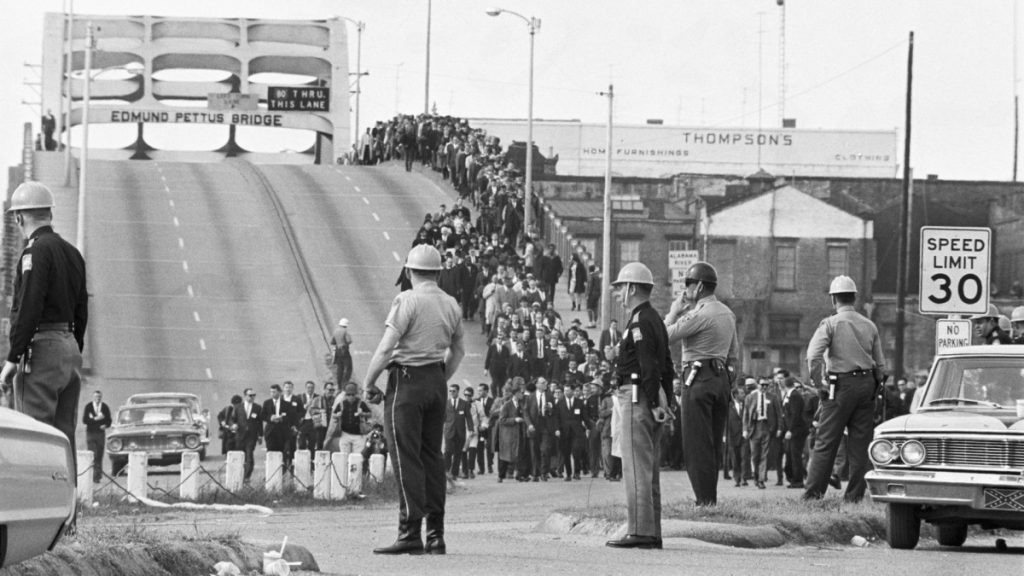 – 600 demonstrators for the civil rights were stopped after a few kilometers at the Edmund Pettus bridge by the local police.

– 84 people were injured, beaten up and gased by the police.

– Martin Luther king joined them them for the second march in order to avoid violence.

– Martin Luther King delivered the speech « How Long, Not Long ».

Here is an extract:

I know you are asking today, « How long will it take? » Somebody’s asking, « How long will prejudice blind the visions of men, darken their understanding, and drive bright-eyed wisdom from her sacred throne? » Somebody’s asking, « When will wounded justice, lying prostrate on the streets of Selma and Birmingham and communities all over the South, be lifted from this dust of shame to reign supreme among the children of men? » Somebody’s asking, « When will the radiant star of hope be plunged against the nocturnal bosom of this lonely night, plucked from weary souls with chains of fear and the manacles of death? How long will justice be crucified, and truth bear it? » I come to say to you this afternoon, however difficult the moment, however frustrating the hour, it will not be long, because « truth crushed to earth will rise again. » How long? Not long, because « no lie can live forever. » How long? Not long, because « you shall reap what you sow. » 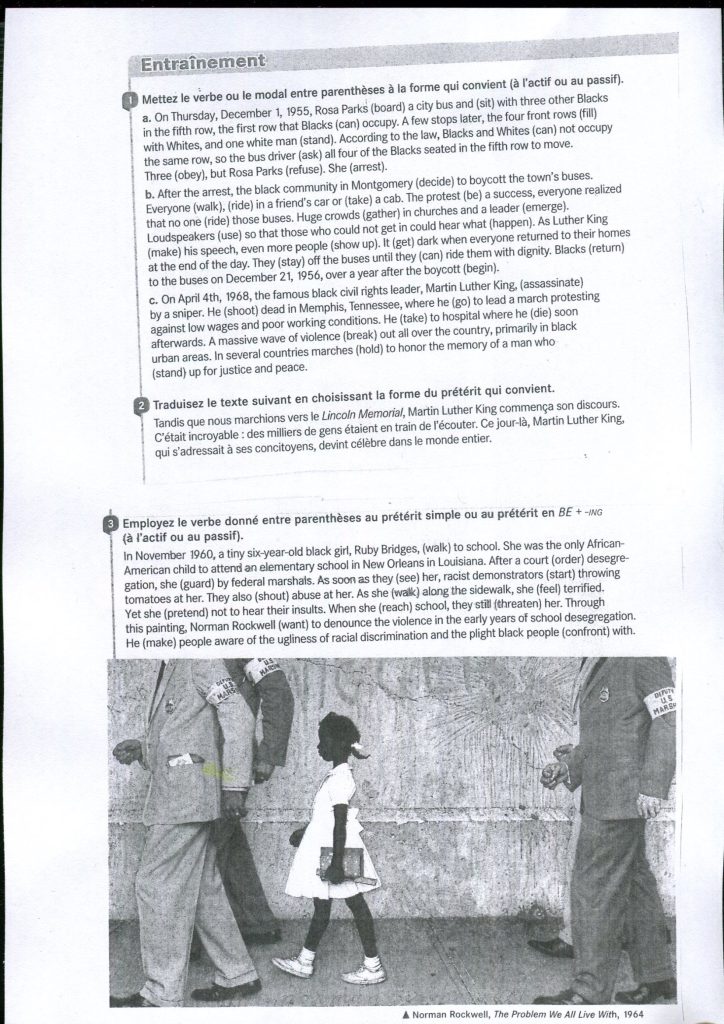