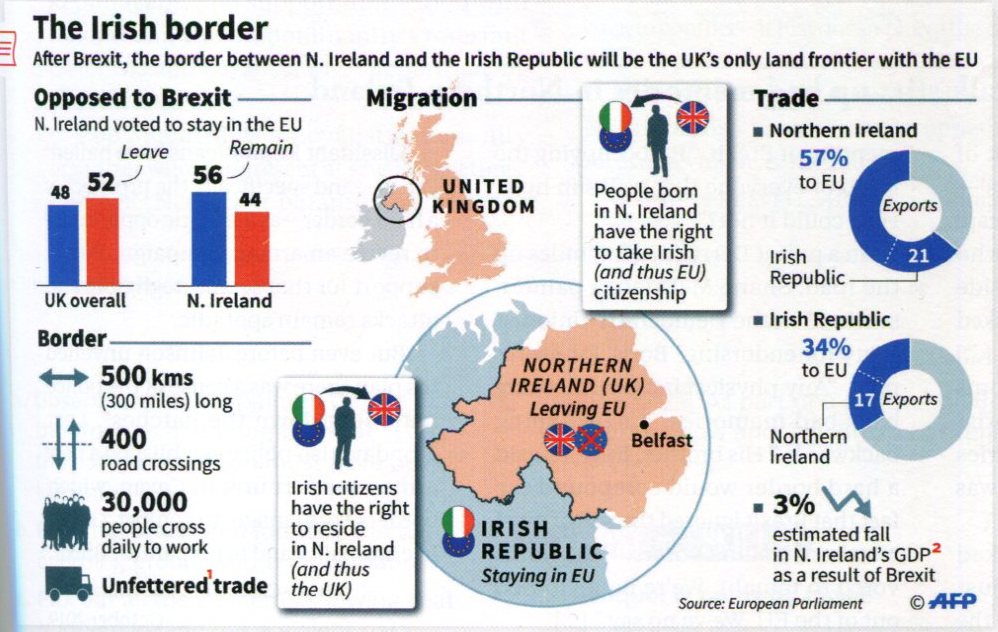 Why has NI a privileged relation with the EU ?

This chart looks at the situation of the border area before the installation of a hard border. We can see that Northern Ireland has a privileged relation with the EU due to its close proximity to the Republic of Ireland. The data shown on the chart explains that there are important and daily exchanges through the numerous crossing points between the two countries, and that it is highly beneficial to the local economy. Northern Ireland and the Republic of Ireland export massively to one another, respectively 21% and 17%, and even more with the rest of the EU, and a lot of people are used to crossing the border daily to go to work. The Irish citizens have the right to reside in Northern Ireland, meaning that there are strong cultural and human connections between the two peoples. These elements explain why Northern Ireland was reluctant to leave the EU during the 2016 Brexit referendum.

Imagine why the Irish border will raise economic concerns

There will be strong economic concerns because, once a hard border is settled, Northern Ireland will lose many profitable advantages that were very important for its economy. It is projected to lose 3% of its GDP since its exports to the EU will be strongly impacted. These exports will probably be taxed and daily life will be more expensive. Transportation of goods between the two countries will also be charged and taxed due to customs regulations.

Imagine which other aspects of N. Irish life will be impacted by the installation of a hard border.

Looking at the chart, one can guess that there will not only be economic consequences for Northern Ireland. A lot of people got used to ignoring the border, crossing it daily, mostly to go to work. This means that they would have to undergo stricter crossing regulations, or even lose their jobs after the physical border is installed. It might also make it harder for Irish people to reside in the UK, which would become problematic if they lived there permanently. There will also be strong changes on the local geography and on the way roads are organised, because the 400 road crossings on the 300 miles-long border line have to be rethought for a stricter separation.

The potential effects of Brexit on Northern Ireland 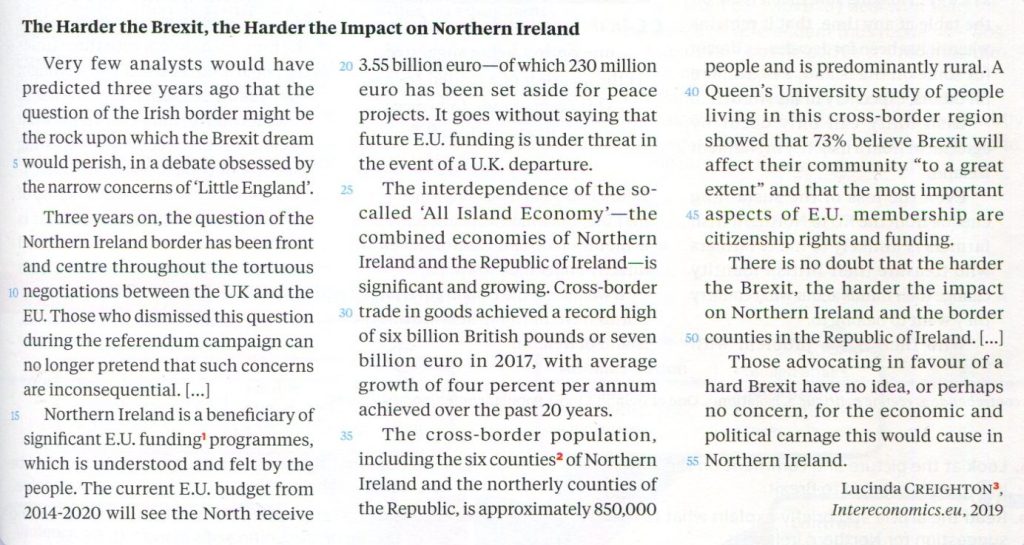 The author: Lucinda Creighton, the author of the text, is the former Irish Minister for European Affairs. We can guess that her point of view is politically partial, and that her opinion of Brexit can be rather negative, since she might be a European supporter.

The economic situation at the time the article was published : it was rather satisfying, compared to what it used to be in the past. The North of the island was receiving important fundings from the EU, and the joint economies of Northern Ireland and the Republic of Ireland gave an impression of prosperity and good trading relations: “Cross-border trade in goods achieved a record high of six billion British pounds or seven billion euro in 2017” (l. 29-32).

The consequences of Brexit for NI according to the author will be dreadful (= terrible / awful):

Conclusion: The author is very critical of Brexit, and also of the attitude of Brexit supporters. Several passages prove her negative opinion of it: “the Brexit dream would perish” (l. 4-5) – “the narrow concerns of ‘Little England’” (l. 6) – “Those advocating in favour of a hard Brexit have no idea, or perhaps no concern, for the economic and political carnage” (l. 51-54). She perceives Brexit as the reflection of England’s lack of consideration, even disregard, for Ireland and Irish people.

A return to the past situation? 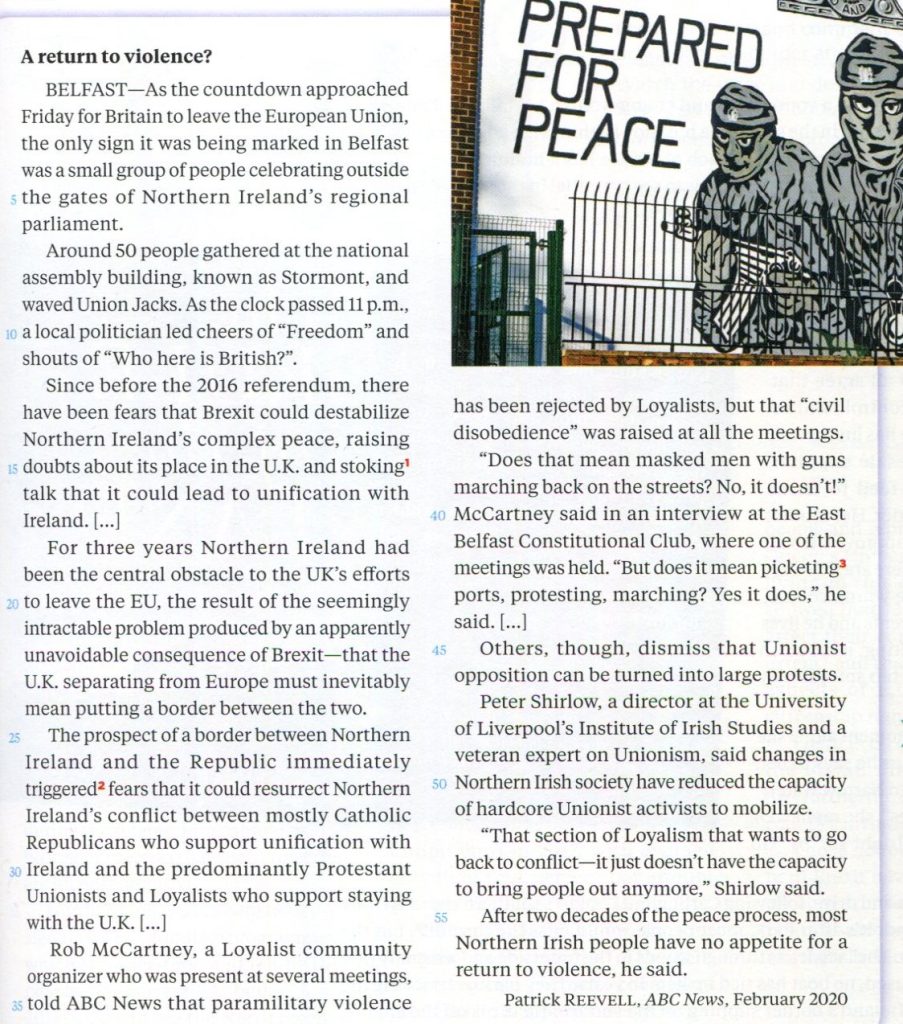 The mural illustrating the article suggests that this area has a history of armed violence and terrorism. The two masked fighters strike us as determined, menacing figures, associated with a threatening message: “Prepared for peace, ready for war”. It seems that the anticipation of a return to violent methods and political division is very strong, and it even implies that the armed groups have not completely disappeared, even after the Troubles.

Yet, the end of the article is reassuring regarding the relationships between the 2 opposing factions; violence is not likely to take place at the border. The people of Northern Ireland are, in a vast majority, tired of armed conflicts, and, according to experts, there are not enough people willing to fight to cause the same violence than in the past. However, given the level of apprehension and the very complex and tensed history of Northern Ireland, it remains a possibility which haunts the local inhabitants. Indeed, we can see that Unionist and Republican sentiments are still very present in the area. There are political leaders and followers who perceive Brexit as a way to reach their respective goals, even though most of them do not want to achieve them through violence. 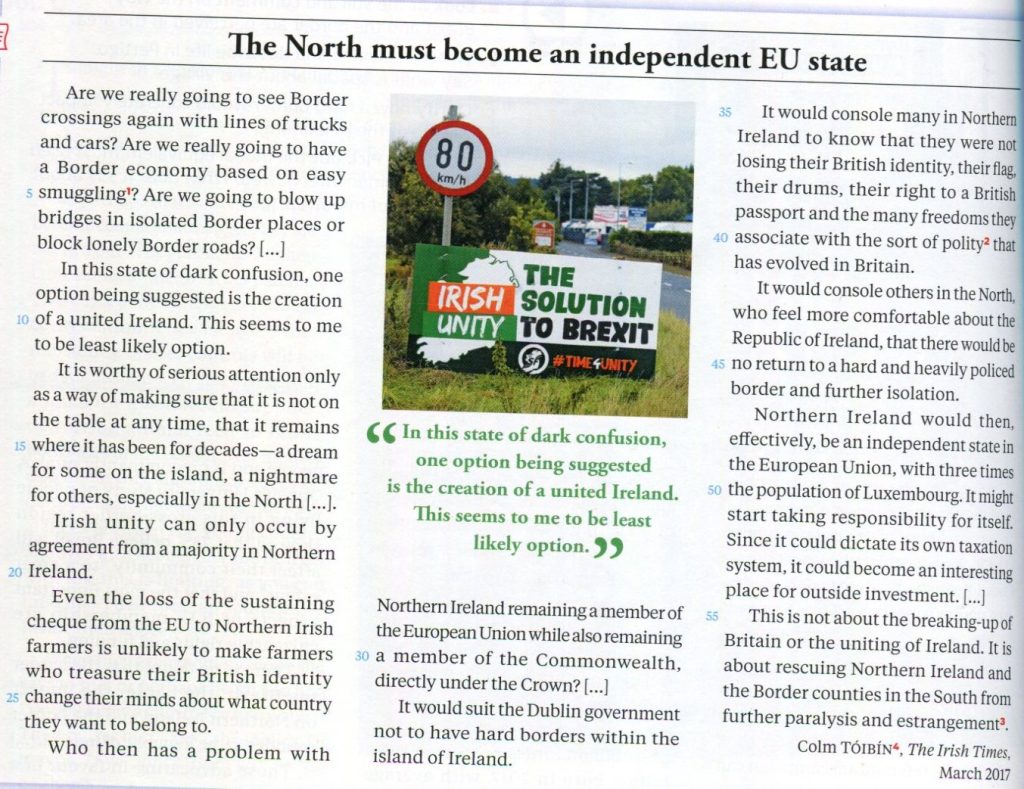 The sign (= panneau)= Irish Unity; the solution to Brexit: people believe Brexit, and the confusion it caused over the matter of the border, could be solved through the unity of the Republic of Ireland and Northern Ireland. As a consequence, the whole Irish island would contain only one independent, sovereign country. It is possible that the supporters of this idea saw Brexit as a threat that would be solved by Irish unity, or simply as an opportunity to reach a political goal.

The creation of an independent state of Northern Ireland:

For him, what matters most (= ce qui compte le plus) is the well-being of the people of Northern Ireland, instead of ideological considerations.