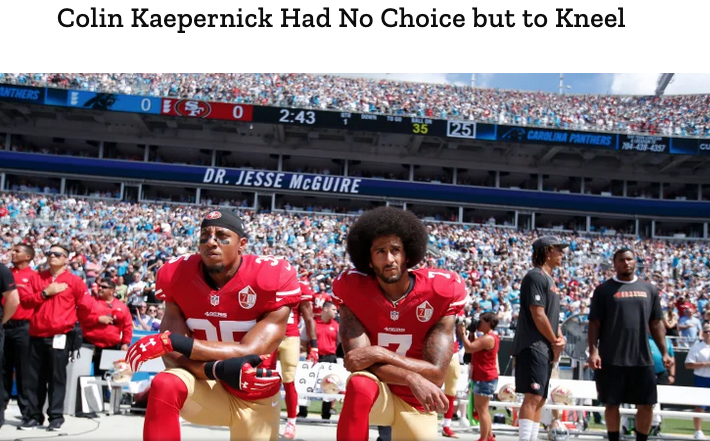 Eric Reid #35 and Colin Kaepernick #7 of the San Francisco 49ers kneel on the sideline, during the anthem, prior to the game against the Carolina Panthers at Bank of America Stadium in Charlotte, N.C., on Sept. 18, 2016.
Michael Zagaris—Getty Images – Photo extracted from Time Magazine

The scene is taking place in a stadium / arena

Colin Kaepernick, who is a famous American football player is kneeling down while everybody is standing and listening to the National Anthem before the beginning of a game.

The other players and the public (or the crowd) are standing and placing their hands on their hearts because they want to show respect to the anthem and the nation.

By kneeling down, Colin and his team mate are protesting against police violence towards black people.

I think his action is meaningful.

He is brave to act this way.

Summary of the video

Kaepernick was strongly criticized for not standing during the national anthem but he is deeply committed to continue his protest against police brutality.
He disapproves the way the police behave towards Black people. He will not give up. He is determined to raise people’s awareness. He wore socks depicting police officers as pigs.
He fights against racism and discrimination. He defends the Black Lives Matter movement.
Some supporters have decided not to support him anymore because of what he did. They have even burnt the athlete’s jersey to show their disapproval 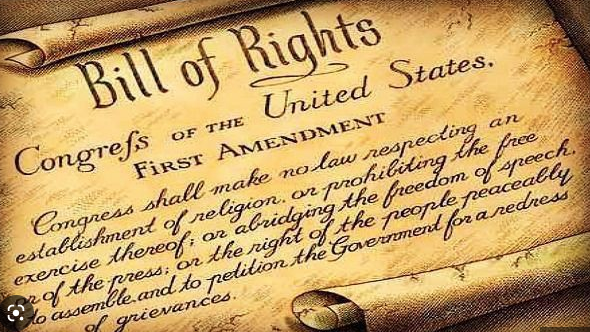 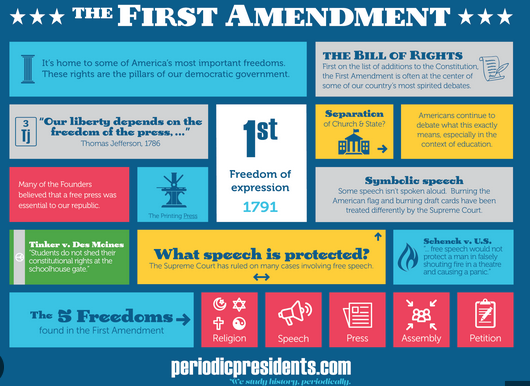 Discover this movement thanks to the 2 following sites:

What happened before BLM?

b) After the arrest, the black community (to decide) to boycott the buses. Everyone (to walk), (to ride) in a friend’s car or (to take) a taxi. The protest (to be) a success, everyone (to realize) that no one (to ride) those buses. Big crowds (to gather) in churches and a leader (to emerge). Loudspeakers (to use) so that those who could not get in could hear what (to happen). As Martin Luther King (to make) his speech, even more people (to show) up. It (to get) dark when everyone returned to their homes. They (to stay) off the buses until they (can) ride them with dignity. Blacks (to return) to the buses on December 21, 1956, over a year after the boycott (to begin).

c) On April 4th 1968, Martin Luther King (to assassinate) by a sniper. He (to shoot) in Memphis, where he (to go) to lead a march (…) He (to take) to hospital where he (to die) (…) A massive wave of violence (to break out) all over the country (…) In several countries, marches (to hold) to honour the memory of a man who (to stand up) for justice and peace.

1) What is the source of the document

Sky Sports is the dominant subscription television sports brand in the United Kingdom and Ireland. It has played a major role in the increased commercialisation of British sport since 1991, and has sometimes played a large role inducing organisational changes in the sports it broadcasts. (Wikipedia)

2) What is the subject of the video ?

3) Do you know what event is at the origin of the problem ?

Hundreds of protestors have died in Tehran and other cities following the death in morality police custody of Mahsa Amini two months ago. The 22-year-old woman died in a prison having been arrested for not wearing her hijab correctly.

4) What did the captain of the team say before the tournament ?

He said that the Iran national team supported the protesters who had died in Iran those past weeks.

7) Who are they demonstrating against ? The government

8) When did the protests start ? 2 months ago

9) How did the fans react when they saw that the players were not singing the anthem ? They clapped their hands

In your opinion, why? They were happy to see that the team supported the protesters in Iran.

10) Who was the only one who sang ? An official next to the coach Carlos Queiroz

He may / might be Spanish or Italian (50% de certitude)

11) How did the coach react to what his players did on the football / soccer field / pitch ?

12) Who was their competitor and how many goals did the team score ?

It was England and they scored 2 goals.

The Iranian supporters who don’t agree with what the team did should stay in Iran.

The supporters who do not support the team’s action / support to the protesters.

because to have fans that only support the team when we are winning, we don’t need them.