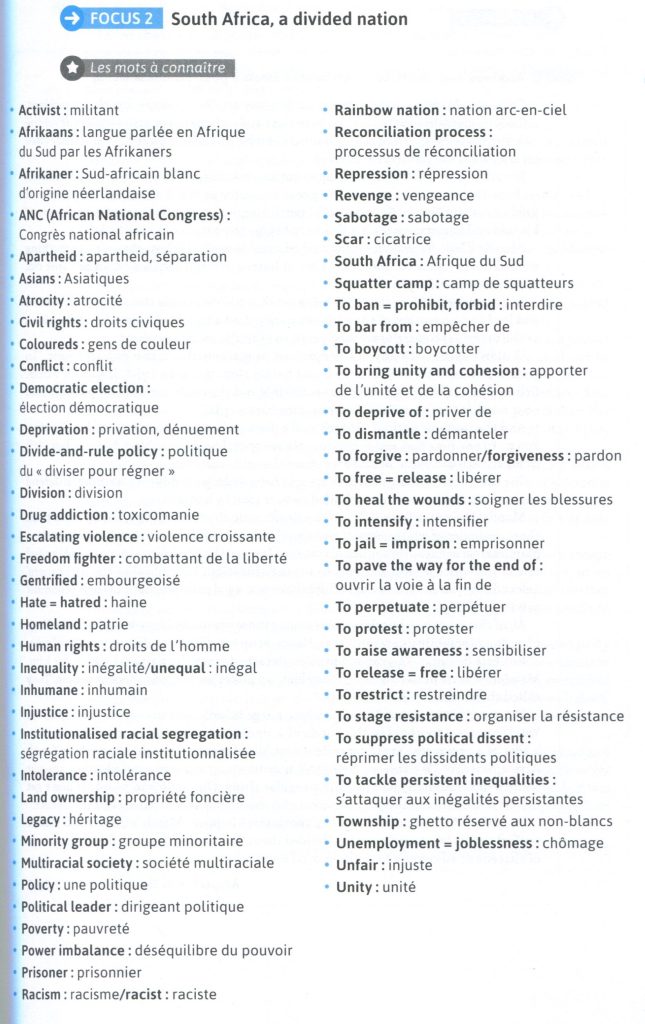 Location: the Southern most country on the continent of Africa situated between the South Atlantic Ocean and the Indian Ocean
Number of provinces: 9 Number of official languages: 11.
South Africans are referred to as the Rainbow nation because of the variety (/vəˈraɪəti/) of its inhabitants . This is the nickname of the country
Language used to communicate at work or at school: English. This is the unifying (/ˈjuːnɪfaɪɪŋ/) langage at work and at school.
National animal: the Springbok

1.a gazelle with a characteristic habit of leaping (= to jump) when disturbed, forming large herds (= troupeaux) on plains in southern Africa.

Why was the rugby team called the Springboks ? Because of the springbuck on their badge. It is also animal which is known for its speed.

(Characteristic of the South African flag : it is multicoloured to represented of the peoples of the country)
Sports : soccer, rugby, cricket
Favourite way to prepare a meal: the Braai (/ braiər/) some kind of barbecue
Watch again and quote the landscapes you can see in the video:

beaches / the savannah / a clearing in a forest / cityscapes / stadiums

A bit of history

The territory has been colonized by Europeans since (= depuis) the 15th century.
– The Dutch (= hollandais) and the British invaded (= envahir) the country.
– The colony became independent in 1910.
– The coastline is 2500 km long.
– It is the 25th largest country in the world with 50 million inhabitants of very diverse origins, cultures, languages and religions.
– Whites represent less than 10% while blacks represent almost 80% of the population.
– 80% of the people are Christian.
– South Africa has a tropical climate in some provinces and a Mediterranean or arid (= désertique) climate in others.
– Many animals live in reserves to protect them from poachers (= braconniers).
– This country, famous for its gold and diamond mines, is a developing country (= un pays en voie de développement) with a very high unemployment rate (= taux de chômage), especially among (= parmi) blacks.
– Black students are still subject to (= soumis à) many discriminations.
– The country is also confronted with (= confronter à) a huge  = enormous) crime rate (= taux de criminalité) and corruption.

– Birth place : Qunu, a small village in South Africa. (It is wrong, this is where he attended school, he was born inMvezo in the Madiba clan. His father was the chief of the clan.)

– At 12 years old : his father died and he went to school

– Johannesburg is the place where he went when he left university.

– What he discovered in this town : Apartheid, the segregation of black people by  white people.

– The township was the place where he lived

– The living conditions there were terrible

– His decision in 1944 : he joined the ANC to fight against (= se battre contre) apartheid

– So the fight against apartheid stopped : wrong

– Frederik de Klerk was the president of the country

– His decision : to release (= libérer) Mandela

The political context of the period

In the first scene, Nelson Mandela has just been freed from jail / prison after 27 years behind bars ( = derrrière les barreaux).

White people consider him as a terrorist whereas (= tandis que)  coloured people see him as a hero / legend.

There were many tensions between blacks and whites ; what happened when Mandela was freed ? After Mandela’s release (= libération), people went into riots (/ˈraɪəts/ se révolter – a riot = une émeute)

Why did Mandela win the presidential election ? He won because all coloured people voted for him.

What do white people think about Mandela’s election ? They think that the blacks are going to avenge (themselves) / get their revenge= se venger.

– In the extract (= extrait) , the rugby players enjoyed playing on a green field (= terrain)

He had two bodyguards because he was in danger / threatened (to threaten = menacer) / He was targeted (= cibler) by white nationalists / extremists.

When he arrived for the first time at the presidential palace which is situated in Pretoria:

– What were white people doing ? They were packing their things beore leaving (to leave= quitter / partir) their offices (= bureau)

– How does Mandela behave (= se comporter) with white people ? He is kind (= nice = gentil) with them. He treats them as (= en tant que) equals.

– What do the whites expect Mandela to do ? (A quoi les blancs s’attendent-ils de la part de Mandela?)  They exect him to fire / dismiss (= renvoyer) them.

Grammar Time: To want or not to want... 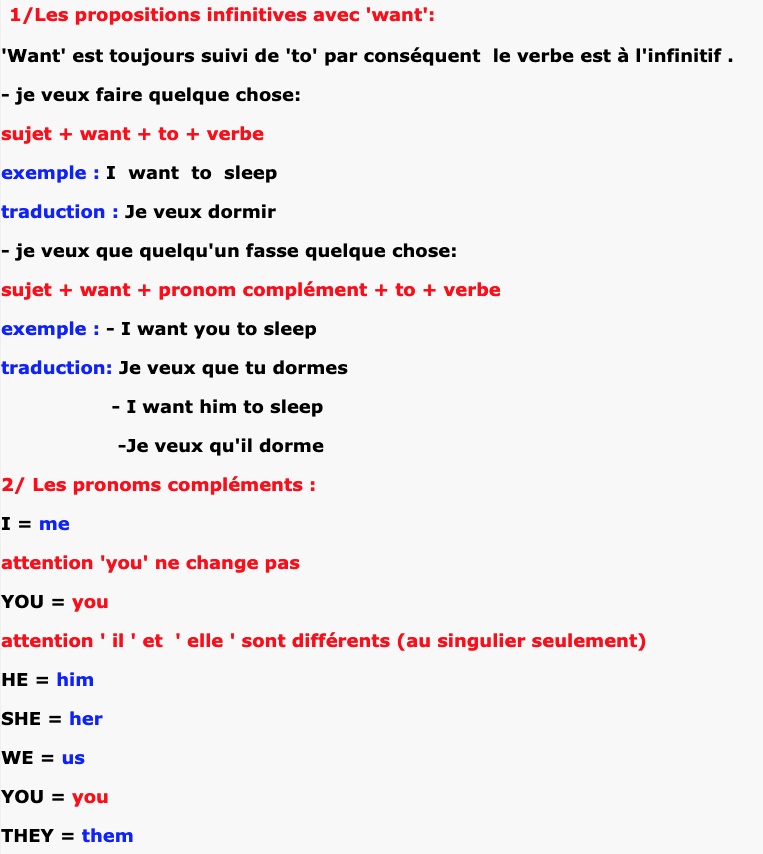 What did Mandela want and didn’t want for his country ?

Mandela wanted to fight against apartheid

Mandela wanted white people to fight against apartheid as well.

Mandela did not want to assault (= agresser) innocent black kids

Mandela wanted to get freedom.

Mandela wanted everybody to get freedom.

Mandela did not want to discriminate black people on the job market.

Mandela did not want Afrikaners to discriminate black people on the job market.