Comics: from Story to History 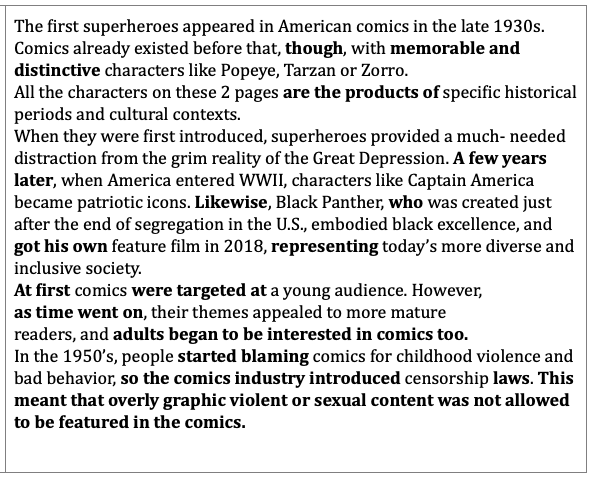 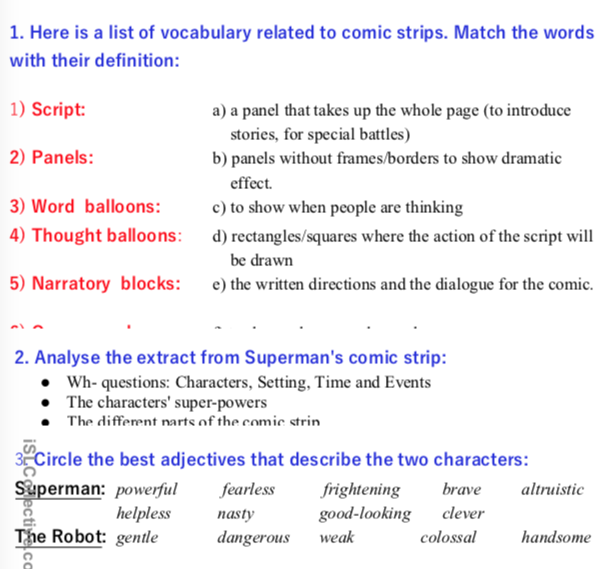 This document is a comic book entitled “Superman” and created/designed by Carmine & Stan, as we can read at the bottom of the page.

The first page is a splash page, used to introduce the story. The title is written in bold letters at the top, on the right. From the naratory blocks on the left, we find out that the action takes place in Metropolis, in winter. Although winter is a time for holidays, Superman stays in town to fight the villains.

This time he faces a mechanical villain as we find out from the thought bubbles. (“chrome-plated sleeve”)

On this first page we can see Superman flying above the rubble of destroyed buildings, in search of the robot.

On the second page we discover the villain, a gigantic robot which is walking through the buildings, destroying everything on his way. We can see pieces of concrete flying in every direction and passers-by running away, terrified/frightened by the monster. The traffic is blocked, and cars are abandoned on the street.

From the speech bubbles/balloons we find out that the robot is glad/delighted to see Superman. He was actually expecting him, to show off his dreadful/terrible powers.

Indeed, it seems that it won’t be a piece of cake/easy to defeat this monster since he is equipped with a lead shield which protects him from S’s x-ray vision.

On the third page we see the robot shooting laser at S and blowing up part of a sky-scraper. The concrete chunk is falling down and is about to crush the passers-by. But S is there to protect them, so he flies and manages to catch the concrete and save those people.

There are two onomatopoeia displayed on the page to dramatize the story.

On the fourth page there are 4 frames, more than on the other ones so/therefore we expect to see more events. In the first frame S is using his infra-red vision to short-circuit the robot but it doesn’t work/it’s no good. The robot defends himself/strikes back with his inertia ray and blasts S down. While S is falling, the robot removes/tears up the roof of a building as if it were a simple carton top.

From the naratory blocks we find out the building houses/contains the S.T.A.R. Laboratories so we may suppose the villain wants to steal some deadly virus and contaminate the population or help his villain friends escape from their cells, or again steal a gene which would transform people into mutants.

But we know for sure that Superman, “The Man of Steel” will manage to defeat him and protect/save the inhabitants.

From the four pages we’ve seen the ingredients of comic strips: a hero and a villain, a terrible threat to innocent people, a battle/fight involving amazing superpowers. All these elements form the plot of the comic book.

The layout is also very important: the drawings illustrate the action, the text in the speech or thought bubbles the character’s words or thoughts and finally, the naratory blocks give details about/specify the plot.

Onomatopoeia are used to dramatize the action and render the events more vivid/lively. 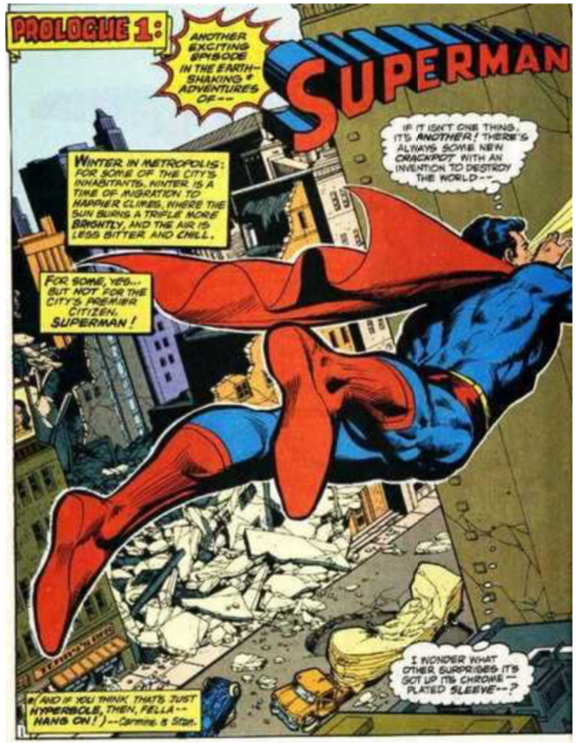 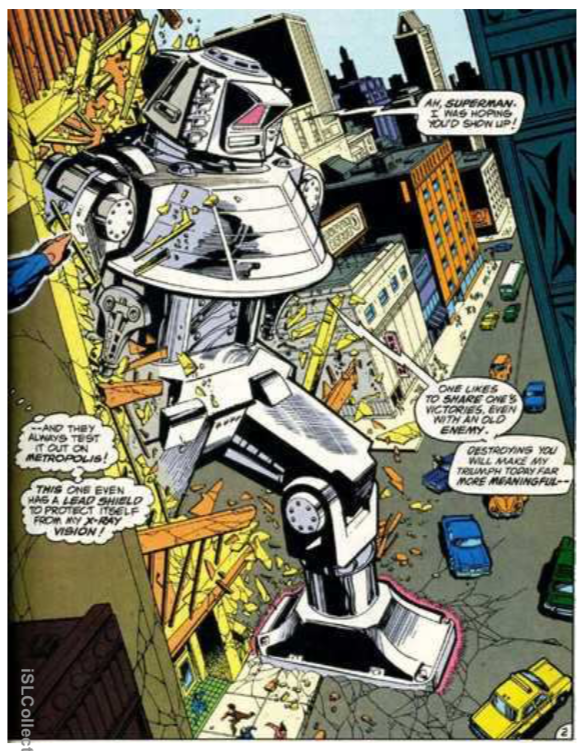 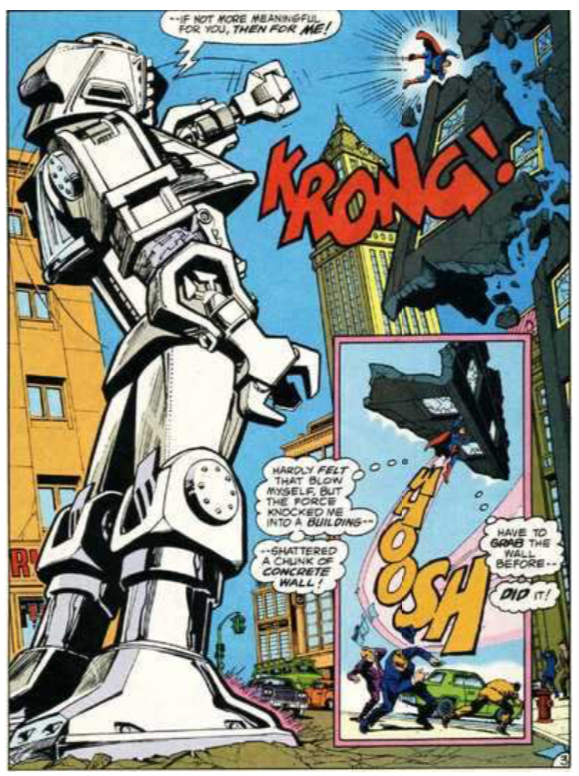 1) Fill in the blanks with the appropriate onomatopoeia words:

After driving a long distance, I like to get out and stretch my arms and legs.

If he says that again, I’ll punch him in the nose.

When Katherine was small, I often patted her on the head when she smiled at me.

She loved dogs, and always used to stop and pet any dog that would let her.

Hurry up! Grab your things and let’s get out of here!

She wasn’t slim enough to squeeze between the two tables.

The lights went out and I had to grope in front of me to find the matches to light a candle.

Tom went to sleep during the meeting and I had to nudge him with my elbow to wake him.

When it’s your turn to have your passport checked, the customs officer will beckon you to come forward.

3) Match the following phrases to the verbs of bodily movement.

3. He blushed   with embarrassment.

4. He fainted after not having eaten all day.

6. He dozed  in his armchair after a hard day’s work

7. He started  in surprise at the gun shot.

What were the first comic superheroes fighting for? 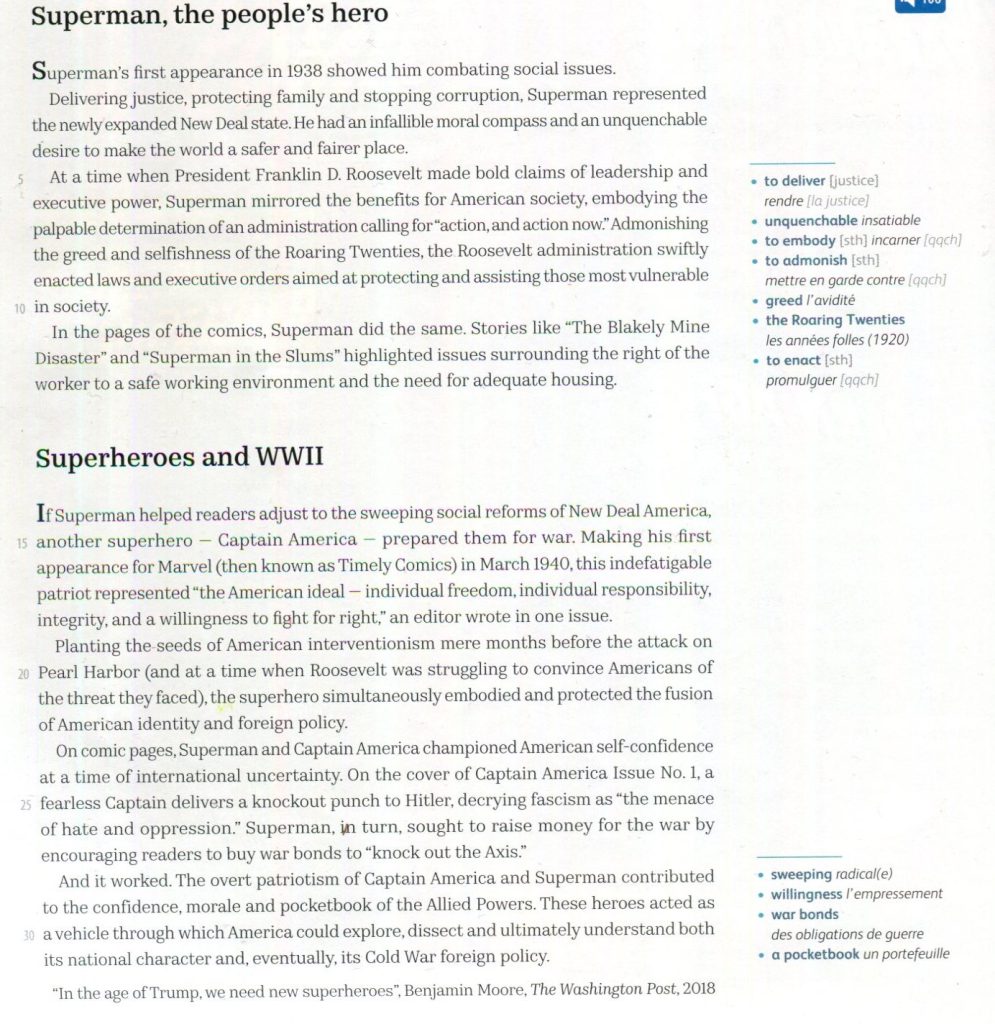 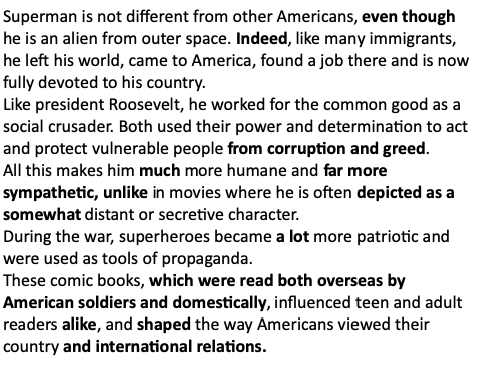 Objective : Are comics reflecting a more complex and inclusive society ?

Pick out words/expressions related to:

Make links between past and present social ills.

The social ills that plagued America in the 1950s and 60s, like bigotry, racism, and social inequality have not completely disappeared. Although segregation has been abolished, nowadays African American citizens still face much discrimination, from racist slurs to police brutality. Social activists are still out there fighting for equal rights, just as Martin Luther King Jr did in the 60s.

Explain what role superheroes have played over the years.

Over the years, superheroes have played various roles. But perhaps the most important and frequent one is acting as outsiders fighting for a better society. For example, the X-Men represent a group of outsiders who aren’t accepted by society for the simple fact of who they are. This mirrors the way that ethnic minorities, women or LGBTQ+ people might feel. Through demonstrating the injustice of such discrimination, characters like the X-Men make a strong political statement and push society to be more inclusive. Just two years ago, the movie adaptation of Black Panther was praised for delivering audiences with the representation they had been waiting for and was a huge step in terms of diversity in Hollywood.

Listen to the interview

When was Black Panther created? Do you think it was a coincidence?

Black Panther was created in 1966. Stan Lee, who co-created this character, always tried to reflect the evolution of the American society, and in the 1960s, segregation had ben outlawed but racial inequality was ever-present. Prominent civil rights activists like Malcolm X and Martin Luther King Jr were campaigning against the racial discrimination experienced by black Americans at this time. Indeed, Malcolm X was assassinated in 1965, and so this may have been the inspiration behind Lee’s strong black superhero that he introduced to the world just one year later.

Black Panther was reintroduced to the public in 2018 thanks to the modern film adaptation. African American audiences can identify with him and the movie cast. He is a breath of fresh air in Hollywood as Black Panther was the first superhero film led by a black cast and many people had been waiting a long time for this moment. People like the positive portrayal of black characters as independent and powerful, and feel the movie and its characters break down social barriers as well as stereotypes.

The release, but also the success of Black Panther goes to show just how far we have come regarding inclusivity in Hollywood and society in general. For too many years, films have been dominated by all-white casts; indeed, many representations of ethnic minorities on film have been rather negative or problematic. Although, it should have been made sooner, and there is still a long way to go, Black Panther is a hopeful sign of things to come for society.

Look at the two posters

The main characters in the movie, apart from Black Panther, are women who look determined and relentless. Rather than being depicted as dependent or sexualized, they are given powerful, independent and important roles, like scientist and spy. They are wearing traditional African outfits and make up, but also pieces of advanced technology, like the Kimoyo beads, making their appearance a mixture of modernity and tradition.

Hollywood has often been accused of having a diversity problem. Today, female-led superhero movies are more common. Hollywood is trying to diversify, with less stereotypical roles for minorities and more inclusivity in casting. The posters demonstrate this: here, we see two strong black women leading the marketing campaign for a Hollywood blockbuster, proving that Hollywood has made an effort to improve representation on screen.

Choose one of the following AI generator to create your superhero: