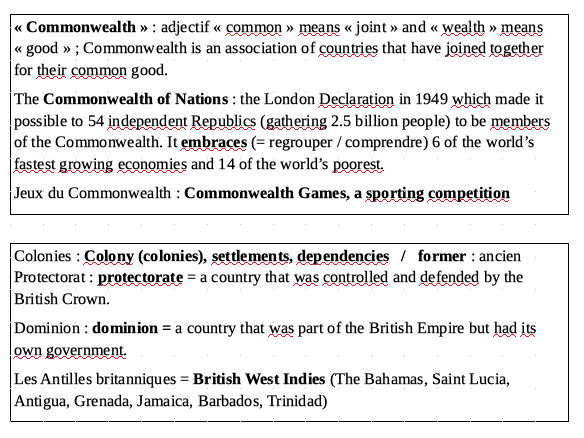 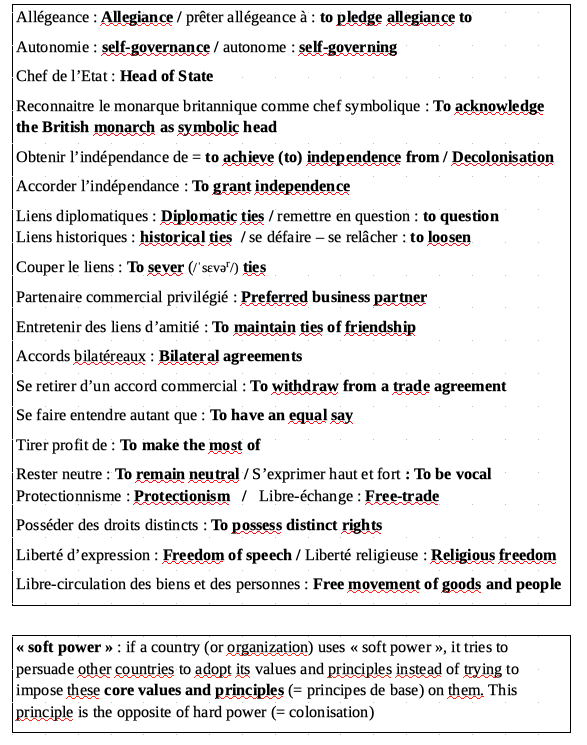 From the British Empire to the modern Commonwealth of nations

– Imperialism : a policy or ideology of extending a country’s rule over peoples and other countries for political and economic reasons. Use of hard (military) and soft (cultural) power.

– Empire : a group of territories throughout the world governed / ruled by one state or ruler

– Colonialism : the policy of a country expanding its domination over conquered territories at the expense of the indigenous people with economic aims (exploitation of the natural resources)

The size of the British empire : In 1922, it was the largest empire ever. A quarter of the earth’s surface and 458 million people.

2 reasons for developping it :

– economic : raw products were needed in Britain / jobs and opportunities given to British people.

– ideologic : there was a race between the European countries to control territories.

How did the Empire develop ? It was not easy and it meant fighting with other nations.

– India (control of the trade of luxury goods)

First blow for the British empire :

Its relationships with indigenous people / examples:

Unfair treatment : they were robbed from their land, their natural resources, they were badly mistreated, some were starved to death, many were enslaved or slaughtered (= massacred). Others (Indigenous Australians) were acculturated (they lost their cultural identities) or their lands were split apart.

The example of slavery :

The British traded 3 out of the 12 million slaves who were brought to the Americas.

Huge profits were made out of this trade and allowed the Industrial Revolution to take place.

Abolition of salvery in the British Empire : 1833 but racism persisted

The ending of the British Empire :

– Nationalism started to spread after WW1 :

The new institution : the Commonwealth of Nations

Definition :The Commonwealth is a powerful association of sovereign nations which support each other and work together towards international goals. It is also a ‘family’ of peoples (all major racial groups are present).

Goal : to work together to influence world events and set up programmes to fight racism, poverty, climate issues. They contribute to the funding of the activities according to their possibilities. Consultation is the key word to be able to set up policies and programmes corresponding to the needs of the countries.

Co-operation is the second key word to exchange skills in numerous domains (professional, cultural and welfare)

Number : 53 independent countries (most of them poor and very small) in the Commonwealth on a voluntary basis

Structure : governments work together in an atmosphere of  trust and understanding following the 1971 Commonwealth Principles. The higher level of the structure is called the Secretariat. This is a strict equality between the countries which used to be former British colonies for most of them. It is close to the UN principles

Their various names   The naming changed to erase the notion of colonization to the benefit of partnership.

Number of people concerned : almost one third of the world population

Person in charge of the inauguration of the Games : Queen E. because she is head of the Commonwealth.

Characteristics of Australia and its Games : Australia is the N° 1 medal winner in the Games’ history (852)  The largest sporting event that Australia has hosted for a decade with18 sports and 7 para-sports with more than 6,600 athletes from 70 nations and territories gathered on the Gold Coast

The emblem of the Games : the baton carries a message a peace from the Head of the Commonwealth, a relay around the world held prior to the beginning of the Games

Impact in the world : huge with 1.5 billion people watching around the world. 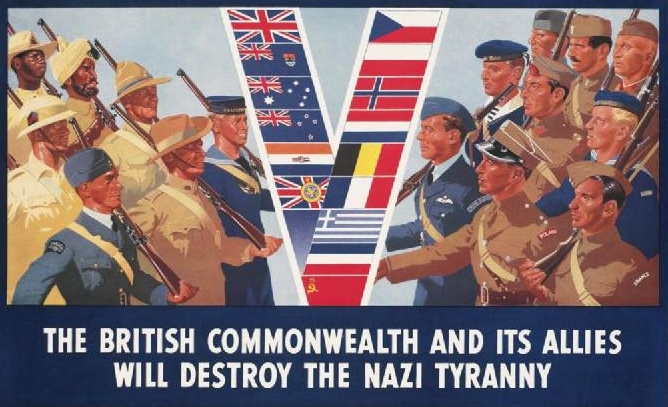 This poster represents Commonwealth soldiers in arms marching side by side towards another group of soldiers representing Britain’s allies during WW2. We can recognise seven representatives of Commonwealth Armed Forces ; they are soldiers from India, East Africa, South Africa, New Zealand, a Canadian airman, an Australian soldier and a Royal Navy sailor.

This picture is a propaganda poster promoting the joint war effort of the British Empire and commonwealth in 1939. The soldiers seem proud to stand together for Britain and look united like a family in a common effort. Indeed, Britain looked to Canada to provide troops to strategic locations in North America, the Atlantic and Caribbean. Over the course of the war, over 1.6 million Canadians served in uniform. Australia, New Zealand, india and South Africa provided dozens of ships and several divisions for the defence of the Mediterranean. Almost a million Australians served in the armed forces. Substantial financial support was also provided by canada to Britain and commonwealth dominions. All in all, Commonwealth soldiers from Canada, New Zealand, Australia, NewFoundland, South Africa, Undivided india and other colonies made up over 40 % of the United Kingdom’s entire fighting force and 35 % of the men killed in service.

Today’s reality is quite different. First, the UK has lost its status as a superpower and its colonies have stopped relying on it for their security. Divisions have emerged within the Commonwealth and none of these countries are ready to fight for the Uk today.

To give something to someone = to provide someone with something

Pallier / rattraper / combler = to make up

to count on = to rely on

Text 1: The Future of Commonwealth 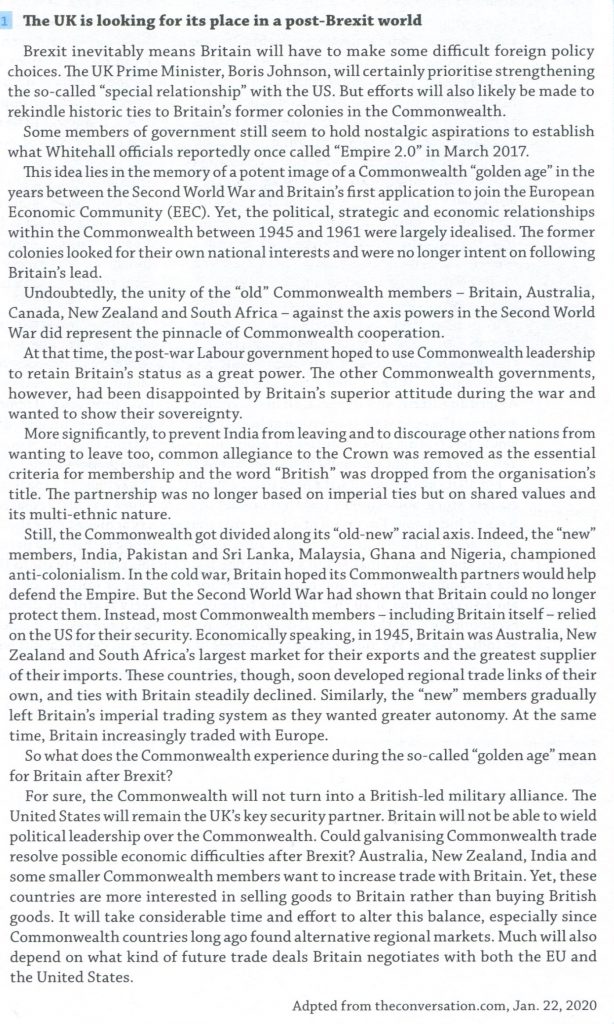 This expression refers to Britain’s nostalgic vision of the time it had an empire with which it had established tight political, strategic and economic relationships. These historic ties to Britain’s former colonies – Britain, Australia, New-Zealand, South Africa- remind the country of its status as a great power and recall images of unity of the « old » Commonwealth members.

Contrast this perception of a « golden age » with the reality.

This vision of the Commonwealth as united contrasts with the reality. The Commonwealth Empire was actually divided between the old and the new members. Indeed, the « new »members, India, Pakistan, Sri lanka, Malaysia, Ghana and Nigeria were in favour of anti-colonialism. Moreover, Britain’s image as a superpower waned as the country failed to protect its colonies, which turned to the US for their security. Economically speaking, after WW2, Britain stopped being the main importer and supplier of its colonies which established their own regional trade links. Trading links also declined with the « new »members. Therefore, the perception of a « golden age » is an idealised vision of Britain’s past status and links with its colonies.

After Brexit, the UK realised it needed to find new partners, especially for its trade relations. That is why it intended to rekindle historic ties with its former colonies in the commonwealth. Yet, today, these countries are eager to stay independent, but also to make the most of trade deals by exporting goods to Britrain rather than buying British goods. Besides, Commonwealth countries found alternative regional markets and are in a position to negociate with Britain.

Text 2: The evolution of a former colony 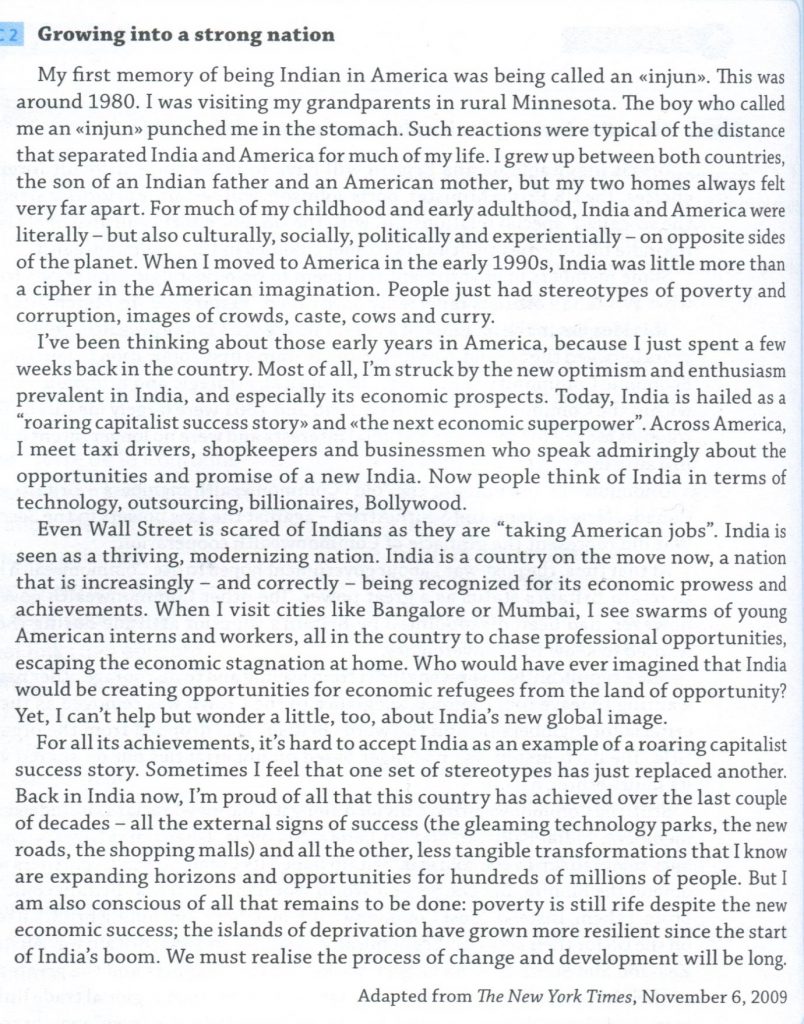 What do you learn about the author of the document?

The author is of Indian origin and he moved to the USA in the early 1990s. The son of an Indian father and an American mother, he was used to going to America to visit his grandparents in the 1980s.

How did India use to be seen by Americans?

India used to be considered negatively by americans. First, it seemed to be a very distant country geographically speaking but also culturally, socially, politically through its huge differences. Then, people associated India with steriotypes of poverty, corruption, overcrowding, caste, cows and curry.

What has changed in the perception and status of India?

Today, India is considered as a future superpower, a capitalist success story. It has become a source of pride and admiration. The former negative stereotypes have been replaced by images of technological performance, outsourcing, billionaires, economic prowess and achievements and a successful movie industry. Unlike the US, India now offers new opportunities and promises of employment and economic success, threatening to take american jobs.

It is no longer seen as a poor country mired in corruption and inequalities but as a thriving, modernising nation able to vie with the first superpower. Yet, the author of the document also highlights the remaining problems of poverty and destitution affecting India.

to underline : to stress =

« For sure, the Commonwealth will not turn into a British-led military alliance.

The United states will remain the UK’s key security partner.

Britain will not be able to wield political leadership over the Commonwealth.

Yet, these countries are more interested in selling goods to Britain rather than buying British goods.

It will take considerable time and effort to alter this balance, especially since Commonwealth countries long ago found alternative regional markets.

What do you think? 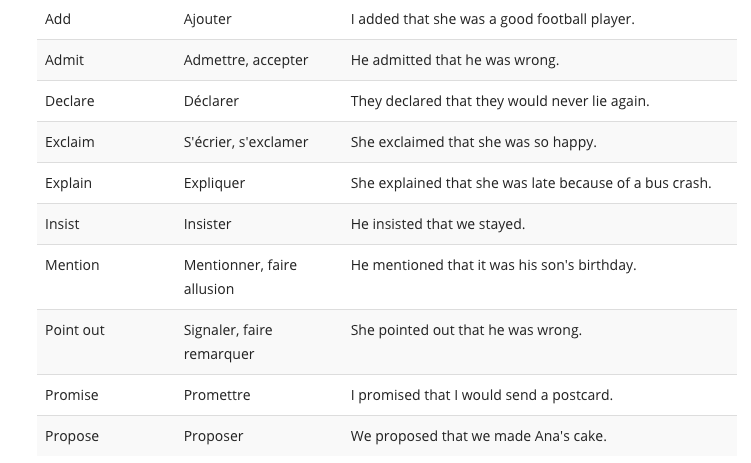 From direct to reported speech

4 La population a fortement augmenté.  The population has increased significantly.

The temperature has been rising significantly for the past few years.

My weight is going down because I have been on a diet.

8 La valeur du dollar est fluctuante/volatile. The value of the dollar is fluctuating.

The price of medicines is constantly falling.

My savings are increasing rapidly / Inflation has been rising sharply in recent years.